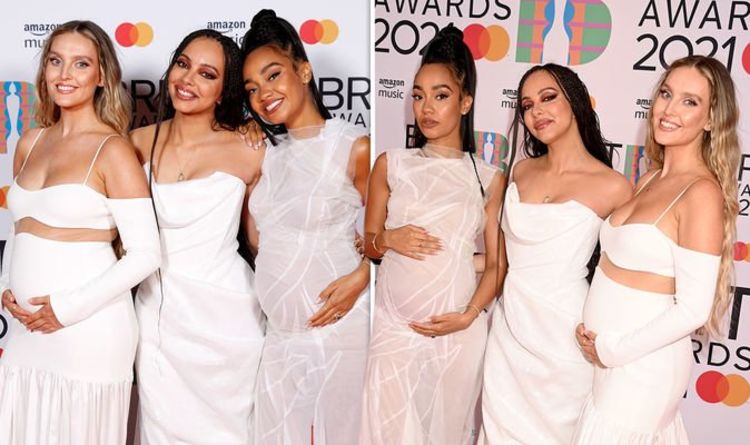 The Little Mix trio opted for floor-length gowns for their red carpet attire this evening, following the news that Leigh-Anne Pinnock, 29, and Perrie Edwards, 27, are respectively expecting their first babies. Leigh-Anne announced her pregnancy earlier this month in a photoshoot with her husband-to-be Andre Gray.
Days later, Perrie, revealed she is also expecting her first baby with footballer Alex Oxlade-Chamberlain.

Tonight is the group’s first red carpet as an official trio, following Jesy Nelson’s departure from the group last year.

As part of her announcement, the latter said the pressures of being in a girl band had taken its toll on her mental health.

She has since begun working on solo material.

Perrie turned heads this evening in a plunging bralette accompanied with a matching flowy skirt as she proudly held onto her bump.

Jade stunned in tight-fitted white gown which clung on to her sensational physique.

By her side was Leigh-Anne, who opted for a nude-coloured dress emblazoned with white patterns.

The group made history tonight as the winner’s of the Best British Group award, against the likes of Bicep, Biffy Clyro, The 1975 and Young T and Bugsey.

“We have been together for 10 years, it’s been the best years of our lives, we have gone through so much,” Leigh-Anne added.

“We have had so much fun and have made so many beautiful memories.”

Leigh-Anne went on to say: “It’s not easy being a female in the UK pop industry,” as she highlighted misogyny and sexism they had experienced.

“We are now using our voices more than ever,” she added, as Jade agreed.

The latter chimed in: “The fact that a girl band has never won this award really does speaks volumes!”

The band won the gong for Best British Video for their hit Woman Like Me in 2019 and British Single for Shout Out To My Ex in 2017.

Tonight host Jack Whitehall was joined by a 4,000-audience, who won’t need to wear masks or be socially distanced, but will need a negative Covid test.

Over half of the tickets were given to key workers from London “to thank them for their remarkable hard work and selfless commitment” during the pandemic.