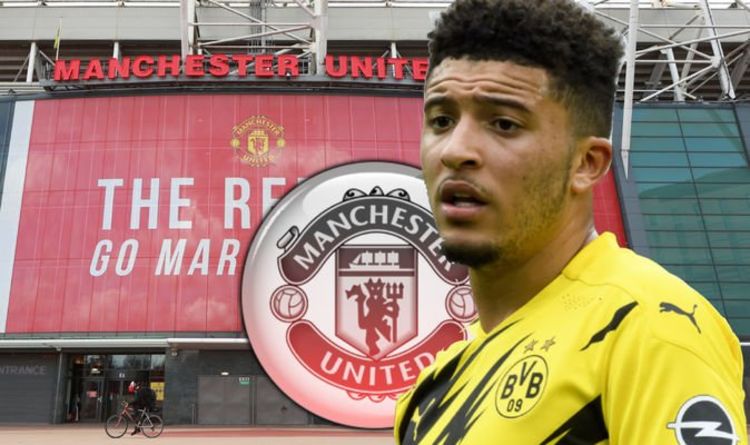 Manchester United want Jadon Sancho signed before the start of the upcoming European Championships and are ready to offer £77million to secure a deal, according to reports. The Borussia Dortmund star has long been admired over at Old Trafford. Jose Mourinho first tried to sign him in 2017 and, now, Ole Gunnar Solskjaer is hopeful of landing his man.
Manchester United wanted to sign Sancho last year, pressing hard to secure his signature.

But, in the end, the Red Devils missed out – with Borussia Dortmund deterring them by slapping a £108m price tag on their prized asset.

Sancho initially struggled to find his feet in the Bundesliga this term, with his failed move to United appearing to impact his performances.

But he’s been better in recent times and, at the current time of writing, has 14 goals and 18 assists to his name across all competitions.

United have also been interested in his Dortmund team-mate, Erling Haaland, but the Norwegian no longer seems to be a priority now that Edinson Cavani’s signed a new contract.

And with Cavani going nowhere, BILD claim United are ready to go after Sancho with vigour this summer.

It’s claimed they’re prepared to offer £77m to make a deal happen, a fee that could force Dortmund into cashing in.

The Bundesliga giants know they’re unable to demand £108m again this summer because of the coronavirus crisis and how the pandemic will impact transfer windows going forward.

And United want Sancho snapped up before the start of the European Championships, with that tournament scheduled to kick off on June 11.

Dortmund would likely be eager to keep hold of the 21-year-old, especially given his recent upturn in form.

But they may find themselves powerless to resist United’s advances, particularly if they fail to qualify for next season’s Champions League.

Sancho boosted his side’s chances of finishing in the top four by scoring the winner against RB Leipzig over the weekend, propelling them above Eintracht Frankfurt.

“If you look at the policy over the last couple of years since Ole has come in, I don’t think they will sign another striker,” Neville said on Sky Sports’ Monday Night Football.

“I haven’t got the contacts on the inside that I used to have, so it’s my assumption because they’ve been desperate for Sancho.

“They didn’t get Sancho and they were criticised for that, I criticised them for that. But they could look incredibly smart this year if they get him for near half the price and they’ve waited 12 months.

“I think Juan Mata has done fantastically well for the club but I think he’ll leave.

“There’s a feeling that Jesse Lingard, he’s done really well at West Ham, but I think Ole will say no, he can explore and go elsewhere. Van de Beek has to stay, in my opinion.

“The rest of them: Rashford, Fernandes, Greenwood, Pogba, Martial, Van de Beek and Cavani – if Manchester United were to sign Harry Kane and Sancho, for example, then will Cavani play? Will Greenwood? Where will that leave Rashford?

“Where does Pogba fit in, if Ole plays two defensive midfielders as he does, with Fernandes in front because he’s a guarantee.

“I think Sancho comes in and he plays on that right-hand side, you’ve potentially got the back-up of Greenwood on that side, you’ve got Cavani and Greenwood up front,” Neville added.

“On the left, you’ve got Rashford and Martial and then you’ve got Pogba who potentially fits in if he’s not in midfield.

“If you sign Kane or Haaland, I don’t think that basically works for United with the way they’ve recruited in the last few years. Allowing young players like Greenwood, making sure Rashford plays, Van de Beek getting a game.

“I think it’s Sancho and then that’s their business done.”