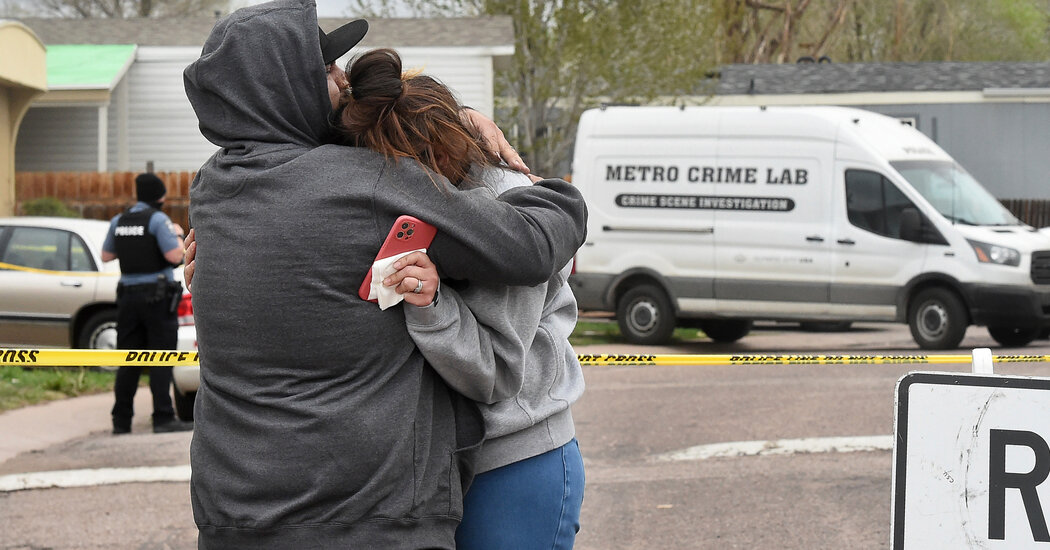 COLORADO SPRINGS — In the early hours of Sunday, the sound of the television inside Gerardo Torres’s mobile home in Colorado Springs was overwhelmed by gunfire outside.

Then, a woman’s cry from a gray mobile home across the narrow lane from his: “No! No!”

As Mr. Torres called 911 and stepped out to investigate, he heard more shooting, then silence. He grimly told the 911 dispatcher that he believed everyone inside was dead.

Police officers arrived minutes later to find that a gunman had killed five people at a birthday party before killing himself. A sixth person was critically injured and died later at a hospital.

The gunman was the boyfriend of one of the women who was killed, the Colorado Springs Police Department said in a statement.

That connection makes the shooting that unfolded early Sunday far more typical of mass killings in America than the shootings of strangers in grocery stores or movie theaters that often capture the nation’s attention.

In more than half of all mass shootings in the United States from 2009 to 2020, a perpetrator killed an intimate partner or family member, according to research from Everytown for Gun Safety, a gun control advocacy group. It defines mass shootings as those in which four or more people are killed, not including the gunman.

Colorado officials did not comment on the gunman’s possible motive on Monday. But the shooting recalled concerns from groups that advocate on behalf of domestic violence victims that the coronavirus pandemic had contributed to an increase in violence at home in some cities and calls for help to hotlines.

The shooting on Sunday happened in a mobile home park in a blue-collar neighborhood near the Colorado Springs airport. On Monday, the yellow police tape that had blocked off the street the day before was gone. A cluster of prayer candles had been left by the curb, next to a bunch of pink flowers arranged in an empty tequila bottle.

The police in Colorado Springs have not released the names of the victims or the gunman.

In the aftermath of the shooting, Mr. Torres, the neighbor, saw one of the adult family members emerge unhurt, along with two children. Mr. Torres threw his coat over the man’s shoulders, he recalled, and tried to comfort him. The man explained that he had hidden in the bathroom until the shooting stopped.

“He just kept saying, ‘He killed everybody,’” Mr. Torres said.

Records show the house belonged to Joana Cruz, 53, who neighbors say lived there with two grown children and her husband, a stone worker. Ms. Cruz ran a cleaning business.

The Gazette of Colorado Springs reported that Ms. Cruz was among the victims, and that family members said the gunman was the boyfriend of Ms. Cruz’s daughter-in-law’s sister, who was also killed at the party.

“This is another example of how the connection between domestic violence and gun violence is undeniable,” said Shannon Watts, the founder of Moms Demand Action for Gun Sense in America. “And it’s made even more deadly due to our nation’s lax gun laws.”

Dwight Haverkorn, a retired Colorado Springs police detective, said this weekend’s shooting was the deadliest killing in Colorado Springs since 1911, when someone who was never identified sneaked into the houses of two neighboring families while they slept and killed six people with an ax.

Mr. Haverkorn spent his retirement documenting and indexing every homicide in the Pikes Peak region, from horseback battles with Wild West desperadoes to modern-day carjackings. He said that while shootouts between law enforcement and gangsters make the headlines, most of the city’s killings are what he called “domestic situations.”

“Nearly every homicide I worked fit that pattern.” he said. “And in the history of this region, the proportion that do is high. Very high.”

Doctors and advocates for victims have been especially concerned about women during the pandemic, when abusers and victims have been cooped up together — and often under financial stress — for unusually long stretches of time.

In the initial months of the pandemic, from March to May 2020, calls to domestic violence hotlines increased by nearly 8 percent, a survey of 14 large American cities showed.

A spokeswoman for the National Domestic Violence Hotline said that the organization had received 26,153 contacts, either through phone calls, online chats or text messages, in which people mentioned the coronavirus as a condition of their experience. The pandemic was noted both as an obstacle to receiving help and a factor in the abuse they were experiencing.