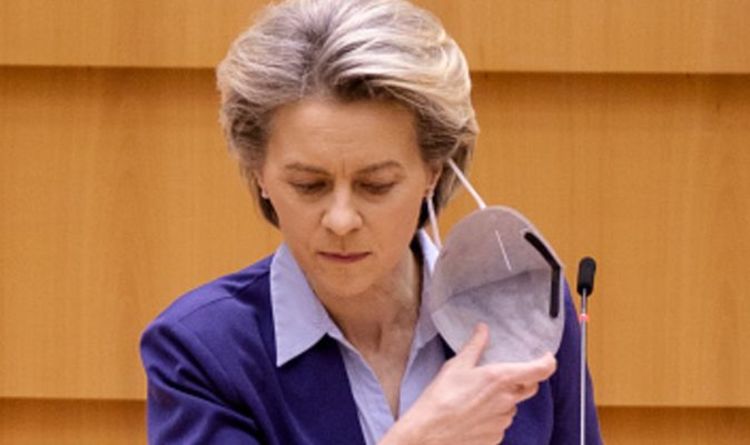 The Commission announced earlier this week it will not renew its contracts with the Anglo-Swedish jab supplier after its failure to comply with delivery obligations to the bloc. But now German Health Minister Jens Spahn has called on the EU executive to order COVID-19 booster vaccines for 2022/2023 from at least four companies.
In a letter to the Commission, he wrote: “It is my firm belief that it is inevitable to continue to apply a portfolio approach to vaccines procurement also for 2022/2023, including vaccines of different technologies and from different companies capable of timely deliveries.

“Therefore, two mRNA-vaccines and at least two additional technologies should be included. I very much hope that you can support this approach.”

The European Medicines Agency (EMA) has so far approved only three other jabs besides AstraZeneca: Pfizer/BioNTech, Moderna and Johnson & Johnson.

Mr Spahn’s demand could therefore force Brussels to revisit its decision on the Oxford vaccine contracts.

European Internal Market Commissioner Thierry Breton said on Sunday the EU had not made any new orders for AstraZeneca vaccines beyond June when their contract ends, after the bloc signed a new deal with Pfizer-BioNTech.

Mr Breton also said he expected the costs of the Pfizer-BioNTech vaccines to be higher than the earlier versions.

The Commission last month launched legal action against AstraZeneca for not respecting its contract for the supply of COVID-19 vaccines and for not having a “reliable” plan to ensure timely deliveries.

He told France Inter radio: “We did not renew the order after June. We’ll see what happens.”

This week, the Commission launched yet another lawsuit against the Oxford jab suppliers over its failure to deliver all the doses contracted to reach the bloc by the end of January.

“AstraZeneca remains an important part of the EU portfolio.

“Many of our citizens are given this vaccine across the Union.

“We want to have the vaccines that the company had committed to in the contract delivered to us as quickly as possible, because they had not respected the agreements.”

The European Union has signed a new contract with Pfizer-BioNTech. It will receive 1.8 billion doses of COVID-19 vaccines for 2021-2023, which will cover booster shots, donations and reselling of doses.

But Mr Breton admitted the move could mean an increase in prices for second-generation vaccines.

This, he claimed, could be justified by the extra research required and potential changes to industrial equipment.

He said: “There may be a little extra cost but I will let the competent authorities unveil it in due course.”