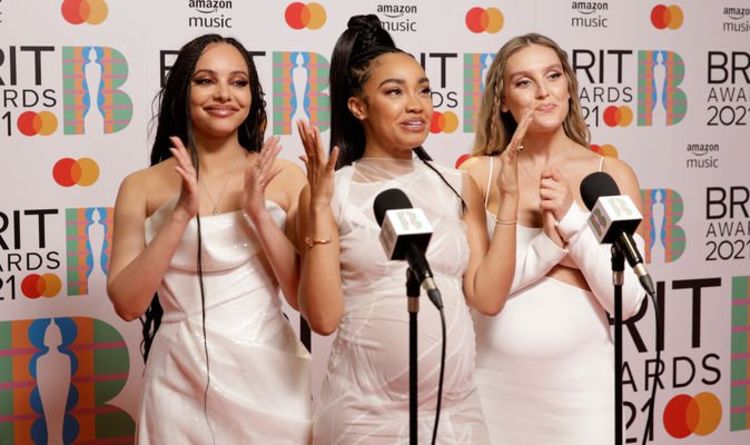 Little Mix are now officially the Best British Group for the first time after winning the gong at the Brit Awards this week. Leigh-Anne Pinnock, Jade Thirlwall and Perrie Edwards excitedly got on stage to accept their trophy live on ITV last night.
When the trio arrived at the microphone their excitement was palpable.

They screamed: “Guys, we have just made history!”

“We have been together for 10 years… it’s been the best years of our lives. We have gone through so much. We’ve had so much fun, made so many beautiful memories.”

Moving on to giving thanks for their award, they said: “We want to start by thanking our incredible fans, of course, Jesy and our amazing team.”

Continuing their speech, the band said: “It’s not easy being a female in the UK pop industry.

“We’re proud of how we’ve stuck together, stood our ground, surrounded ourselves with strong women and are now using our voices more than ever.”

As the group had alluded to, Little Mix are the first girl group to win the Best British Group award.

At the time, Jesy quit the band as it had taken a “toll on her mental health”.

The singer was victim to a number of online troll attacks, leaving her feeling as if she couldn’t remain in the band.

Last week, Jade, Leigh-Anne and Perrie spoke out for the first time about their bandmate’s exit.

Speaking to Roman Kemp on Capital Radio, Jade said: “I think, you know, if someone’s heart isn’t in it anymore and they don’t want to do it, we would never… we’re never going to force each other to do anything we don’t want to do, and we supported that decision.

Perrie added: “Of course,” before Jade went on: “And yeah, it is, it was very strange thinking about doing this as a three but we weren’t ready to give it up.”

Jade went on: “Yeah, so we support whatever Jesy’s decision is, and that’s that really!”