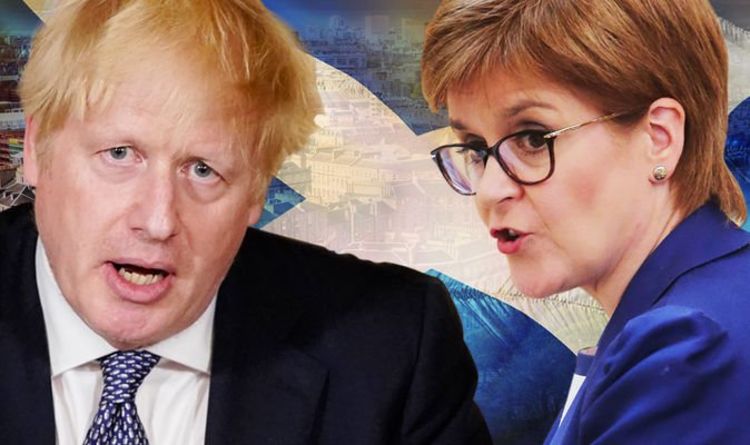 Scottish First Minister Nicola Sturgeon is ramping up the pressure on the Government as she looks to secure a second independence referendum. Following the Scottish National Party (SNP)’s fourth consecutive Holyrood election win, in which the party was just one seat short of a majority, she warned the Prime Minister that Scotland will get a second referendum on independence. She said on Sunday: “Given the outcome of this election, there is simply no democratic justification whatsoever for Boris Johnson or anyone else seeking to block the right of the people of Scotland to choose our future.
“If the Tories make such an attempt it will demonstrate conclusively that the UK is not a partnership of equals and that – astonishingly – Westminster no longer sees the UK as a voluntary union of nations. That in itself would be a most powerful argument for Scotland becoming an independent country.”

Ms Sturgeon aims to take Scotland back into the EU, but Mr Johnson could well stand in her way according to one expert.

Marc Weller, professor of international law and international constitutional studies at the University of Cambridge, warned that Scotland can’t gain reentry into the bloc without London’s agreement.

He highlighted Cyprus, Greece, Romania, Slovakia and Spain’s blocking of Kosovo’s long-running bid to join the EU as a sign of a potential barrier.

Professor Weller, who was a legal adviser on the Kosovo peace process and served as a United Nations senior mediation expert, added: “The unqualified agreement of both sides, Edinburgh and London, on the process that leads to independence would be essential.”

The expert said that the EU would not accept an independence referendum which isn’t “consensual”.

He told The Times: “Yes, Scotland might be able to force a referendum against the wishes of the UK Government, or hold a consultative poll instead.

“However, Holyrood could not achieve independence with guaranteed EU membership if the process leading to independence appears to be anything but fully consensual.”

Despite this, he did also offer encouragement to independence supporters, claiming that the UK Government can’t deny a vote “indefinitely”.

Prof Weller raised the prospect of international courts getting involved in any dispute, adding that Scotland’s right to leave the Union was “established informally in UK constitutional practice” after the 2014 referendum.

If you cannot see the poll below please click here.

The Scottish government is attempting to use a section 30 order to try and gain the powers to hold a vote.

Professor McHarg highlighted how Mr Johnson could take a similar approach to that used by the Government in 2018 Scottish Continuity Bill – referring Ms Sturgeon’s attempt to secure the powers to hold a referendum to the Supreme Court.

The bill aimed to empower the Ministers in Scotland to make amendments that would enable Scottish law to be aligned with EU law after the end of the Brexit transition period.

Professor McHarg continued: “Assuming a referendum bill is passed by the parliament, there is then a four-week period where both the UK and Scottish law officers have the opportunity to refer it to the Supreme Court for a ruling of whether it’s within competence or not.

“This happened with the Scottish Continuity Bill, the UK Government referred the bill to the Supreme Court which meant it couldn’t get royal assent and be enforced.

“It took several months for the Supreme Court to hear the case, and in the meantime the EU Withdrawal Act was passed and that reduced the legislative powers of the Scottish Government.

“There is a risk that the UK Government could refer a referendum bill to the Supreme Court and pass legislation to make clear Holyrood cannot call an independence referendum.

“There is no legal barrier to prevent the UK Government from attempting to do this. Whether or not it is a justifiable course of action would of course be a matter of dispute. I can imagine a lot of people would regard it as illegitimate.”