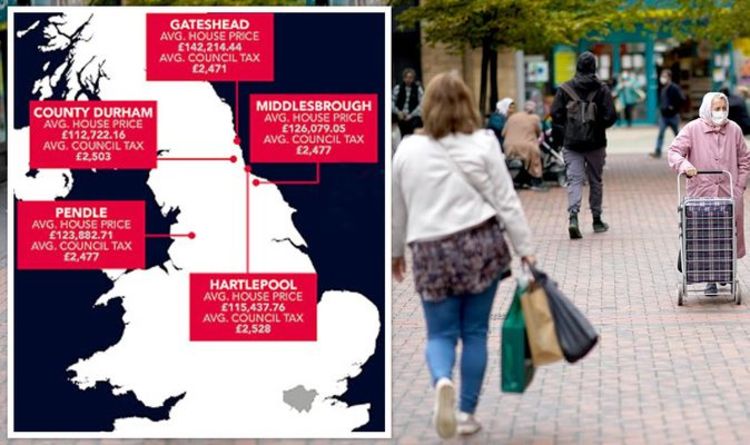 Understandably, the disparity between how much is paid depending on where people live has sparked plenty of debate. The analysis, by money transfer experts Xendpay, examined official Office for National Statistics (ONS) data for the latest house prices and council tax rates, which are calculated based on the value of a property as of April 1, 1991.
It compared more than 300 areas of England, in terms of both average house prices and council tax bills.

The research found that the London borough of Kensington and Chelsea now has the UK’s highest average house price, measured at £1,220,511.49 in February 2021.

The London boroughs of Westminster and Wandsworth each have an average bill just under £1,000 – at £945 and £966 respectively – the two lowest rates in the country.

But, the story is very different when it comes to house prices though.

However, its residents receive the eighth-highest average Council Tax bill at £2,503.

Meanwhile, its average council tax bill is £2,528, the sixth-highest in the country.

The analysis found Rutland has the highest average council tax bill in England, at £2,568.

Earlier this week, Express.co.uk compiled a map of the findings, highlighting the top five biggest, and the top five smallest, bills compared to house price.

A reader shared the article on Reddit, with hundreds of people commenting on the findings.

“It’s unfair and ridiculous. I shouldn’t have to pay more because I’m in a worse off area. It’s a tax on the poor,” wrote one person.

If you can’t see the poll below, click here.
Another commented: “I used to live in Westminster for a brief period. The council tax was nothing, we’d have our waste collected twice a week etc.

“I now pay significantly more, waste is collected every two weeks, massive reduction in services etc. Council is constantly selling off public land, and they are eyeing up the allotments. It’s a disgrace.”

Another person had looked into their own council tax bill, to discover how much they were paying more than another property band in Westminster.

“I checked, and my band C property pays more than a band E property in Westminster,” they wrote.

Another person asked: “Shouldn’t council tax be based off the value of the house?”

Not all Reddit users agreed with one another though.

One person penned: “Is that because a wealthier area has less costs for things like social care compared to poorer areas?”

Another posted: “Westminster makes so much money from business rates it can afford low council tax.

“County Durham doesn’t quite have the expensive commercial properties of Oxford Street, Regent Street, Soho, and Covent Garden to add to its coffers.

“I bet they make quite a bit from parking too – I remember it being something like £4 for 20 minutes at a meter.

“Then yes, they generally have less to spend. Though Westminster and K&C etc. certainly do have some very deprived areas too.”

A spokesperson for Xendpay, the money transfer experts who carried out the analysis, spoke exclusively to Express.co.uk about the findings, and the reaction.

“It’s clear from the comments that council tax provokes strong reactions, no matter where you live,” they said.

“The UK’s gross average wage is around £31,500, so a council tax bill of £2,000 takes up six percent of it, which is obviously a considerable amount.

“And with many council tax bills across the country set to increase, the debate is not likely to stop anytime soon.”