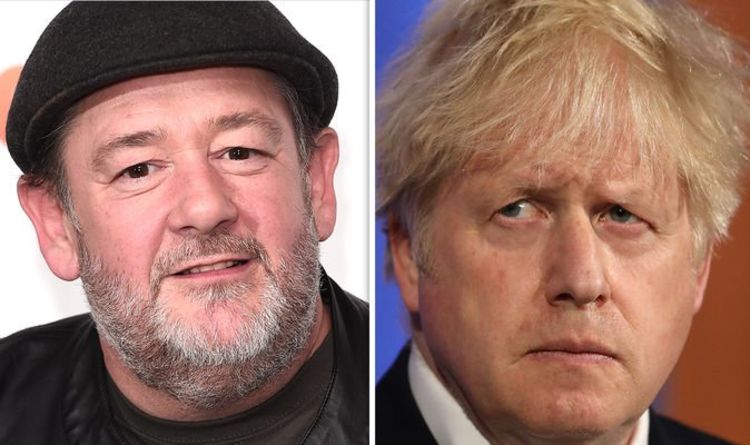 Johnny Vegas will star in a new entertainment show called Carry on Glamping, which starts tonight on Channel 4. The new four-part series follows Johnny, his assistant Bev, and a gang of vintage vehicle enthusiasts who are all racing against the clock to get a collection of old vehicles in top nick before the campsite opens. While discussing the show, the 50-year-old opened up about the sad loss of his mother Patricia, which led him to tears in one episode.
He said: “I’d just lost my mum, two years after my dad, so due to grief, Covid, being separated, away from my children and the fact I was starting to develop anxiety issues – I’d about had enough.”

The comic admitted he wouldn’t normally open up that much on camera, but he became overcome with emotion.

Johnny’s close relationship with his mother led to anger directed at Prime Minister Boris Johnson and his handling of the NHS.

His comments came in November 2019 before the general election, in which the health service was a key issue for voters.

Johnny claimed his mother was turned away from A&E after she had to wait three hours for an ambulance to arrive.

The comedian’s late mother Patricia had been in and out of hospital at the time, and found that the emergency department was “full to capacity”.

Taking to Twitter, Johnny expressed his anger towards the Conservative Government while expressing sympathy for NHS staff.

He said: “Three hour wait on an ambulance but A&E had to close its doors, full to capacity. Why be angry at the incredible folk working under unbelievable stress?

“I remain grateful, my bitterness belongs to @BorisJohnson @Conservatives at your neglect of our @NHSuk & blatant drive to privatise.”

An A&E doctor replied to Johnny on social media saying that the emergency department could do nothing as it was “full”.

She added that spaces couldn’t be cleared as there were no more beds for additional patients.

Johnny responded: “Yet Georgina, they’d have us blame you for providing the best care you are allowed & funded to provide.

“How you manage to do it with such conscientious & ongoing commitment humbles me. They want patients & yourselves demoralised to the point that we surrender our @NHSuk Never!”

During the election campaign, the Conservative Party made pledges to increase funding in the NHS.

DON’T MISS
Sturgeon’s EU dream could be quashed by Johnson [INSIGHT]
Brexit backlash as EU properties being sold by expats [ANALYSIS]
Brexit row: EU ‘taking comfort in how much the UK has lost’ [INSIGHT]

One promise was the addition of “50,000 nurses” into the health service by 2024/25, although fact-checkers highlighted that the policy would mean only 31,000 of these nurses would be new recruits.

The Conservative Party’s manifesto said they were proud “to have begun work on building 40 new hospitals across the country”.

It added: “We will build and fund them over the next 10 years.”

The claim came under scrutiny as experts argued the £2.7billion investment would fund new facilities on existing hospitals.

Johnny has also been a vocal critic of the Government’s course on Brexit.

Prior to the 2016 referendum, he hit out at the Leave campaign on Twitter.

He said: “I’ve had far more people trying to scare me into leaving and far less convincing reasons as to why we’ll benefit from #Brexit.”

Carry on Glamping airs tonight at 10pm on Channel 4.