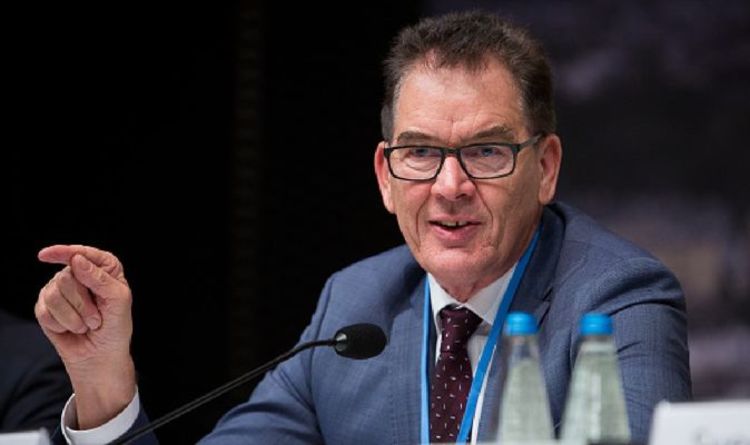 The Christian Social Union (CSU) Federal Development Minister, the party in coalition with Angela Merkel Christian Democratic Union (CDU) party, lashed out against the EU executive and his counterparts in the bloc over Europe’s failure to export COVID-19 vaccines to developing countries.
Gerd Muller told Maischberger, a German political TV show, he was shocked at Brussels’ inability to keep its promise to help developing countries in the fight against the pandemic.

He lamented only one percent of people in Africa have had the chance to get a vaccine while the EU has just secured another batch of 1.8 billion doses with supplier Pfizer/BioNTech.

He blasted: “The situation is such that five countries in the world and the European Union have secured 75 percent of the vaccines!

“The EU secured five times as much per capita as the population!

“On the other hand, there are 30 countries that don’t have a single dose.

“In Africa only one percent of people have the chance to get a vaccine!

“This virus conquered the whole world from Wuhan within four weeks.

“We will only defeat the pandemic if we defeat it worldwide!”

READ MORE: British expats in France ‘left out in the cold’ after Brexit

The South African Medical Research Council (SAMRC) has been monitoring excess deaths since May 2020.

In its latest report, published on Wednesday, the SAMRC said South Africa had seen 157,000 excess deaths in the past 12 months and estimated that 85 percent of them were caused by COVID-19, which means just over 133,000 people have died from the disease.

This compares to an official death toll of 54,968 since the start of the pandemic.

South Africa implemented one of the world’s most restrictive lockdowns from March 2020, when cases were still relatively low, and the SAMRC said increases in weekly deaths due to the pandemic only became evident from May 2020 onwards.

Excess death figures, which some epidemiologists say are the best way to measure the true toll from COVID-19 given that counting methods vary between countries, surpass official COVID-19 death figures in many countries.

The SAMRC report said the excess death rate per 100,000 population for South Africa was 258 over the past 12 months.

This places the country – on an age-standardised basis – in the top five countries for which excess deaths are measured.

The health ministry declined to comment immediately on the report.

Last year, South Africa imposed tough lockdown measures to curb the spread of the virus, including border closures and even bans on the sale of alcohol and cigarettes.

Most restrictions have now been lifted but a recent rise in infections has prompted fears of a third wave of the pandemic as the southern hemisphere’s winter approaches.

South Africa’s vaccination campaign got off to a slow start but it has now ordered millions more doses. The health ministry said on Wednesday around 430,730 shots had been administered so far, with priority given to frontline healthcare workers.