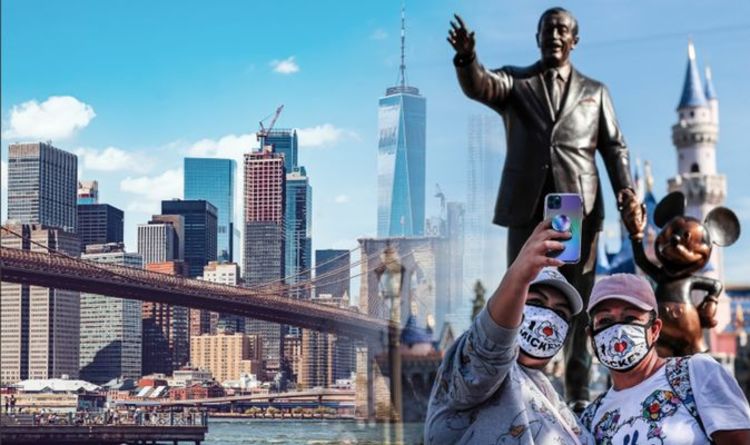 Holidays to the US have been on hold for more than a year amid coronavirus restrictions. While Britons are currently still banned from entering the US unless for a specific set of essential reasons, travel experts are predicting this could soon change.
In fact, according to Simon Calder, UK travellers could be welcomed back to the US by “early June”.

The move is expected to come in tandem with President Joe Biden’s visit to the G7 summit in Cornwall.

“Let’s talk about America specifically because I sense that come early June when Joe Biden turns up in the UK for his visit to the G7 summit which is being held in Carbis Bay in Cornwall that he is going to want to bring a gift of some sort and that may be the gift of travel,” said the travel expert.

According to Bloomberg, in the US, 263 million doses have been given so far. In the last week, an average of 2.2 million doses per day were administered.

Anthony Fauci, director of the US National Institute of Allergy and Infectious Diseases, has said that vaccinating 70 percent to 85 percent of the U.S. population would enable a return to normalcy.

Though the vaccine rollout is proving positive, at the time of writing the US remains on the UK’s “amber list”.

Arrivals from “amber” countries also have the option of shortening their quarantine by opting into the Government’s “Test to Release” scheme.

Gov.uk explains travellers must opt into the scheme and book their test before their journey to the UK.

Secretary of State for Transport Grant Shapps confirmed last week that the Government will review the “traffic light” lists “every three weeks”.

Speaking at a Downing Street address to the nation he said: “I regret that favourite summer destinations like France, Spain and Greece are not yet included but every three weeks from reopening we will be reviewing the countries to see how and where we can expand the green list. This is just a first step.”

agreement, could, from, holidays, resume, style