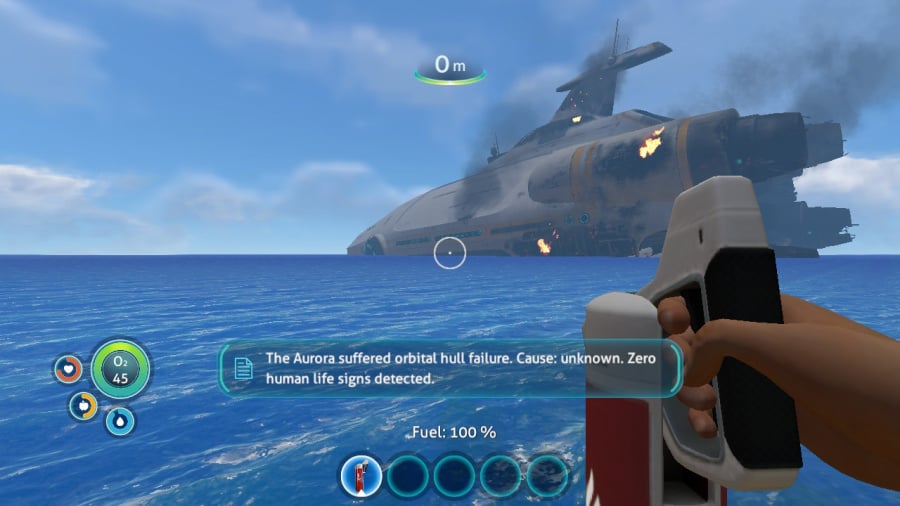 Subnautica really is one of the great indie early access success stories, a game honed to near perfection during a long gestation period on PC, with lots of input from avid fans helping to shape the core experience as it exists today. As a result what we’ve got here is a confident and constantly thrilling marriage of addictive gameplay loops, with hugely satisfying crafting and base building elements, well-implemented survival mechanics and a world and story that absolutely ooze wonder, mystery and full-on existential dread in equal measure.

Kicking off with your silent protagonist crash-landing on the alien planet 4546B, Subnautica immediately throws you into this heady mix as you fight to extinguish a fire aboard your tiny little escape pod before getting your bearings and coming to the realisation that you need medical aid, sustenance and an explanation as to what’s just happened. Climbing the steps up and out of your pod for the very first time you’re greeted by an endless ocean stretching out on all sides, with the enormous burning remains of your mothership, the Aurora, the only structure visible in any direction.

From here, Subnautica expertly delivers tantalising little nuggets of its sci-fi narrative, providing just enough intrigue to drive you forward as you get to grips with its excellent core mechanics. You’ll immediately need to dive right into the vast ocean below your pod if you want to live, get to gathering food, water sources and the vital materials necessary to put together your very first life-saving tools. Early doors you’ll craft a basic scanner to survey and document the various alien flora and fauna you come across, alongside a torch, survival knife and repair tool, but then the game gradually starts spitting out the really good stuff; it’s this constant, addictive drip-feed of tantalising tech, alongside some of the most immersive exploration we’ve experienced in a game, that keeps you hooked in for the long-term.

As your tech tree expands, as you search, discover, mine, scan and build, you’ll find yourself beginning to get a proper grip on this huge and hostile environment. There really is an absolute ton of craftable tech and building components to discover here that expand and evolve cleverly as you progress, enabling you to search ever further and deeper. That said, we really don’t want to spoil too much about the unlockable gadgets or the story, as just uncovering it all for yourself is where the real magic of Subnautica lies.

This is such a wonderfully well-realised world too, remarkably beautiful at times with a diverse range of biomes to slowly and methodically discover – it can also be truly and utterly terrifying. Subnautica digs its hooks into our most basic, primal fears of the ocean, of drowning, of getting lost in treacherous underwater caverns or succumbing to some great monstrosity in the deepest, darkest depths. On the flip side of this, it also somehow manages to be one of the most chill games we’ve ever played, absolutely devouring our time as we mine for materials to build bases and upgrades, explore great neon reefs and spin endlessly around in search of more secrets, treasures and tech.

When Unknown Worlds announced they were bringing this one to Switch we were hugely excited, this is one of our all-time favourite games after all, but it was excitement tempered with a degree of scepticism as to how on earth they’d manage to cram the entire experience onto Switch in a properly playable manner. As it turns out, we needn’t have worried as this is a super solid port that – besides a few loading stutters here and there and some scenery pop-in that’s present in every other version of the game – successfully delivers one of the very best survival experiences on any platform to Nintendo’s hybrid console.