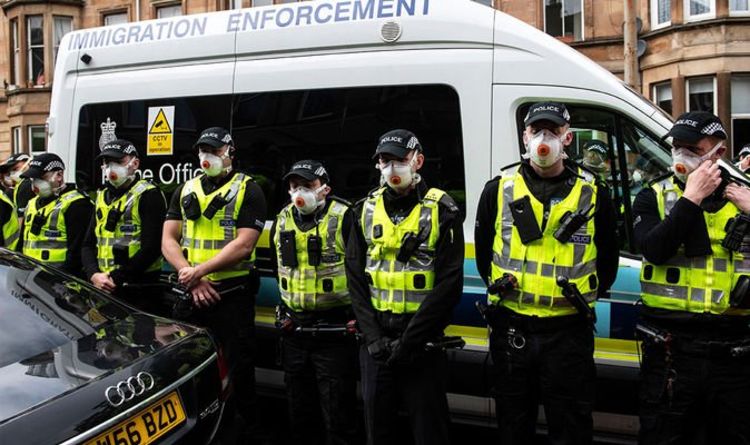 This was met with mass protests during which demonstrators surrounded a Home Office vehicle and refused to move. Police moved in but decided the two men should be released to defuse the situation.

They had been detained over “suspected immigration offences”.

“Police Scotland were in an invidious position – they do not assist in the removal of asylum seekers but do have a duty to protect public safety.

“Both as MSP and as FM [First Minister], I will be demanding assurances from the UK government that they will never again create, through their actions, such a dangerous situation.

“No assurances were given – and frankly no empathy shown – when I managed to speak to a junior minister earlier.

“I am proud to represent a constituency and lead a country that welcomes and shows support to asylum seekers and refugees.”

Police were deployed after the Home Office vehicle was surrounded, but following a “suitable risk assessment” decided the two men should be released.

In a statement Police Scotland said: “In order to protest the safety, public health and well-being of all people involved in the detention and subsequent protest in Kenmure Street, Pollockshields, today, Chief Superintendent Mark Sutherland has, following a suitable risk assessment, taken the operational decision to release the men detained by UK Immigration Enforcement back into their community meantime.

Whilst many of the protestors wore masks they did not appear to be socially distancing.

In a statement the Home Office said: “The UK Government is tackling illegal immigration and the harm it causes, often to the most vulnerable people by removing those with no right to be in the UK.

“The operation in Glasgow was conducted in relation to suspected immigration offences and the two Indian nationals complied with officers at all times.

“The UK Government continues to tackle illegal migration in all its forms and our New Plan for Immigration will speed up the removal of those who have entered the UK illegally.”

Ms Sturgeon claimed the Home Office operation was a “health and safety risk”.

She commented: “I disagree fundamentally with UK Home Office immigration policy but even putting that aside, this action was unacceptable.

“To act in this way, in the heart of a Muslim community as they celebrated Eid, and in an area experiencing a Covid outbreak was a health and safety risk.”