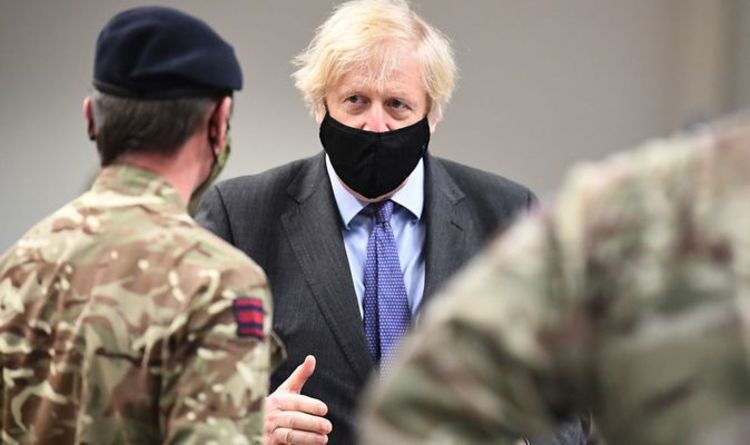 Cases of the mutation continue to rise, raising concerns about the final lockdown roadmap date of June 21. Boris Johnson has said “hard choices” could lay ahead if the variant – B.1.617.2 – is found to be “significantly” more transmissible. Mr Johnson told a Downing Street briefing it could “pose a serious disruption to our progress and make it more difficult to move to step four in June.”
Any emerging virus strain capable of reigniting high cases has the potential to overwhelm hospitals and undo hard work made along the roadmap so far.

Most cases have so far been detected in the North West of England, with Bolton, Blackburn and Sefton in Merseyside affected. Instances have also been recorded in London.

Colonel Russ Miller, Army commander of the North West, will lead responses in the region with surge testing in the streets.

Mr Johnson said: “Colonel Russ Miller, commander of the North-West region, will be deployed to support local leaders in managing the response on the ground.

Minutes of the meeting between the Scientific Advisory Group for Emergencies (Sage) on Thursday suggested it is “highly likely that this variant is more transmissible” than the Kent variant (B.1.1.7) and “a realistic possibility that it is as much as 50 percent more transmissible”.

Professor Chris Whitty, Chief Medical Officer for England, said: “There is now confidence … that this variant is more transmissible than B.1.1.7.

“We expect over time the Indian variant to overtake and dominate in the UK.”

Mr Johnson has also urged the people of Bolton and Blackburn to “play their part in stopping the spread of the new variant” by ensuring they are vaccinated and undergoing rapid tests twice a week.

He added: “Our best chance of suppressing this variant is to clamp down on it, wherever it is and we’ll be throwing everything we can [at it].”