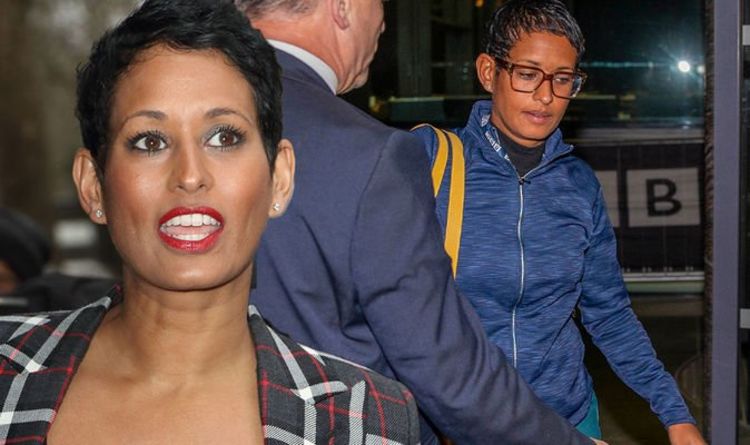 Naga Munchetty, 46, warned listeners before her BBC Radio 5 Live guest told her an emotional and heartfelt story on the show. The BBC Breakfast host admitted the moving tale had moved her to tears before she had arrived at the public broadcaster’s office that morning.
Naga welcomed Josie Lloyd onto her morning radio show, to discuss her new novel, which was inspired by how she had completed a 10k run in Brighton alongside other cancer survivors.

Josie, who was diagnosed with breast cancer but is now cancer-free, had the most incredible anecdote from her time in the race, which she wanted to share with listeners.

However Naga interrupted her and said: “Can I just say one thing before you say this, I’m warning my listeners now… I read this, this morning and I cried on the way to work.

Josie started: “It’s the story that inspired me to write a whole novel. So what happened was this lovely woman fell into step next to me [during the race] and she was the picture of health, she had this gorgeous glossy hair.

“She said, ‘I had Stage 4 cancer, they thought I was a goner.

“I ran all the way through my treatment, and look at me now and we had a little… she said, ‘Go on keep going, you can do it’.

“I was so inspired by her and she was so lovely. She ran on and I kind of got my mojo back and I ran on.”

However, when Josie got to the end of the race, the kind runner stopped and wanted to continue their conversation.

Josie continued: “At the final turn of the race she had waited for me. She said, ‘Stop a sec, I want to talk to you,’ and I said, ‘What is it?’

“And she said, ‘When I was going through my absolute lowest ebb I was in a café, near the hospital and I was feeling wretched, and this woman, this stranger across the café came over to me and she said, ‘Listen I know what you are going through, I’ve been there, and I just want you to know to have hope because your life will be even better at the other side of cancer’.

“This woman in the café had taken off a little butterfly necklace, which she had given to this runner and said, ‘This is a little butterfly of hope, and I want you to wear it and know your life will be better than ever on the other side of cancer’.

“And now in the race, this runner took her necklace off, the same necklace I’m wearing now, and she gave it to me and said, ‘Look this is your little butterfly of hope now, and I want you to wear it and know your life is going to be better than ever.

“’Just know you are going to be fine,’” she finished.

Josie has now released The Cancer Ladies’ Running book which details her experience with the disease and how she found hope and friendship through running.

Elsewhere, Naga has been keeping her fans entertained on social media after she revealed how a supermarket assistant had turned her away from buying a bottle of wine.

The TV host spoke out on Twitter after she was unable to purchase alcohol after leaving her ID at home.

Naga typed in view of her 254,000 followers: “Am winning at life in a small way this morning…

“Just been refused to be sold a bottle of wine at the local supermarket by the lovely lady at the till because I had no I.D. YES!”

Fellow BBC host Sophie Raworth, 52, said she was also recently asked for a form of identification while trying to purchase alcohol.

She responded: “I got ‘carded’ recently to see if I was over 25 in a supermarket. I was wearing a mask and a hat to be fair. But still.”