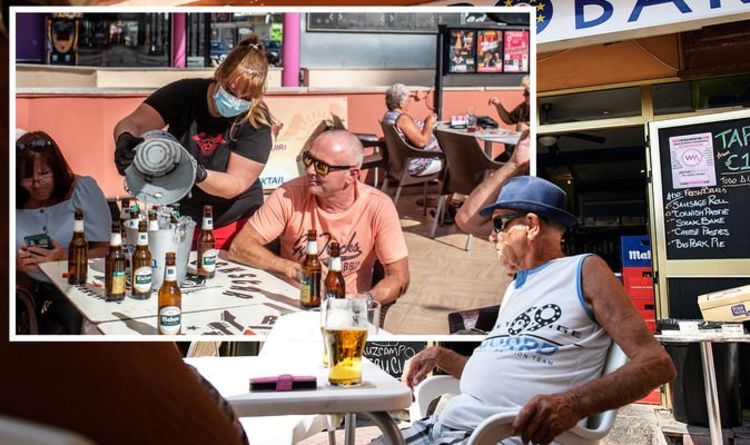 For Britons looking to relocate to Spain, whether it is for retirement or for work, Benidorm is a popular choice. As of 2020, there were approximately 2,946 Britons registered as living there making up 4.14 percent of the population.
While the golden sunshine and laid-back lifestyle is a major draw for expats, life in the seaside resort isn’t always easy.

Tony Harrison, a British expat currently living in Benidorm, told Express.co.uk some of the “tougher months” happen when the main bulk of tourists have gone home.

“The community in Benidorm swells in the summer months as workers flock to work in the bars, restaurants, and hotels,” Mr Harrison explained.

“In winter it is small and very cohesive, many only stay for a couple of years and those that chose to stay permanently stick together and help each other out.

“It can be a tough life with low salaries during the tourist season and lonely frugal months in the winter.”

However, while there may be struggles in the quieter months, the sense of community that springs into action is something Tony says he “loves”.

The slowness of the off-season also has its perks.

As Mr Harrison points out, it is a key time for workers and locals alike to relax and unwind.

“I personally love the winter months as they are still warm and the old town has a different feel, mainly locals are in the bars and this is when we recharge our batteries,” the Benidorm expat explained.

DON’T MISS
TUI to fly to 19 holiday destinations from May 17 [FULL LIST]
Spain could welcome Britons back by May 20 [COMMENT]
Expats:’Floods’ of Britons to relocate to Portugal [INSIGHT]

“The new town in winter shuts down with only a few bars open, many of the community head for the old town for fun and company.”

It also provides an opportunity for those who work through the tourist season to finally enjoy a holiday themselves.

“Most people work in hospitality, so they are committed to the tourist season which tends to run from April until December, Benidorm has a longer season than most resorts,” said Mr Harrison.

“Most people here don’t have the money to go away on what we would consider a conventional holiday, but those that do manage to put some money away or are fortunate enough to have an alternative income tend to holiday in Thailand, India and South America.

“For many, however, going back to the UK for a couple of months in winter is an opportunity to catch up with family.”

While the winter months are usually the only time tourism slows in normal times, amid the travel restrictions of COVID-19 the resort’s foot traffic drop by 97 percent.

How the resort’s tourism season will fare in 2021 is yet to be seen.

Currently, Spain remains on the UK’s “amber list” for travel, meaning Britons hoping to jet off to Benidorm must do so in exchange for 10 days of quarantine on their return home.

Despite this, there is hope on the horizon, with the UK’s “traffic light” travel lists under review “every three weeks” according to Secretary of State for Transport Grant Shapps.

Fernando Valdes Verelst, Spain’s tourism minister, has suggested the country could welcome back Britons by June.

Meanwhile, Spain’s Minister of Industry, Trade and Tourism, Reyes Maroto has pinned hopes on the reform of travel restrictions under the European Union’s resolution 912/2020 to welcome Britons back as soon as May 20.

Though the future is uncertain, one thing that has only grown during the pandemic is the community spirit that thrives in the resort.

“The community in Benidorm is a strong and loyal bunch who really stick together, the past year has seen some real generosity and caring which has supported many,” said Mr Harrison.