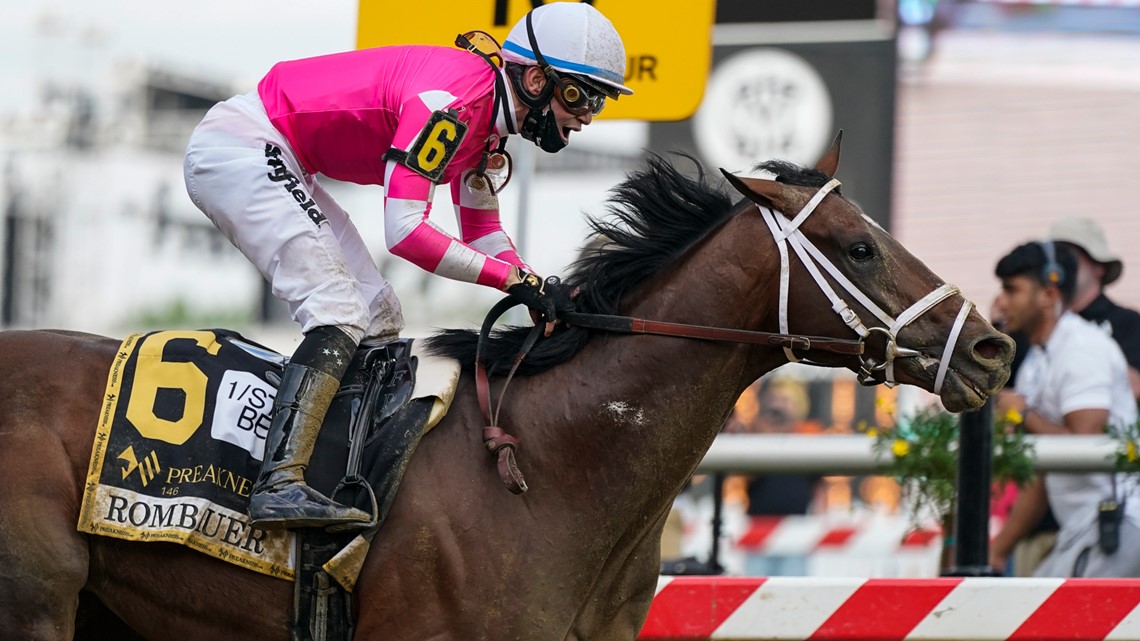 Medina Spirit finished third in the 1 3/16-mile race and was passed for the first time in his career after going off as the 2-1 favorite.

BALTIMORE — Rombauer romped to an 11-1 upset victory in the Preakness on Saturday, denying Bob Baffert-trained Kentucky Derby winner Medina Sprint the chance at a Triple Crown that would have come with a giant asterisk.
Medina Spirit finished third in the 1 3/16-mile race and was passed for the first time in his career after going off as the 2-1 favorite. All eyes were on Medina Spirit after he failed a post-Derby drug test for the presence of the steroid betamethasone.
“I had to come out running to get my position,” Medina Spirit jockey John Velazquez said. “I knew that he was going to be pressed today. I was hoping that he wouldn’t overdo it, and we did.”
Midnight Bourbon, who was 3-1, was second. Keepmeinmind was fourth and Baffert-trained Concert Tour ninth in the 10-horse field.
Rombauer busted the bias of horses hugging the rail on the dirt at Pimlico Race Course all day, going past Midnight Bourbon and Medina Spirit down the stretch and winning by 3 1/2 lengths.
Jockey Flavien Prat won the Preakness two years after being elevated to the Derby winner aboard Country House when Maximum Security was disqualified.

“Of course it’s a lot different when you cross the wire first: You get that feeling,” Prat said. “It’s a lot of joy.”
Trainer Michael McCarthy won his first Triple Crown race and captured the Preakness before Hall of Famer Todd Pletcher, for whom he worked as an assistant before opening his own barn. Pletcher gave McCarthy a big bear hug after the race.
Rombauer is owned by John and Diane Fradkin, a far cry from Medina Spirit’s Zedan Racing Stables and other horse racing conglomerates. He won for the third time in seven starts.
McCarthy choked back tears while talking about everyone involved with Rombauer.
“Means a lot to be here, participate on a day like this,” he said. “Happy for the Fradkins. Just goes to show you that small players in the game can be successful, as well.”
McCarthy said this week Rombauer’s best weapon was between his ears and that his colt was training well. But few picked the long shot to win the Preakness, which was run in front of 10,000 fans at Pimlico Race Course.
Baffert was not in attendance, staying away because of the controversy with Medina Spirit, who still could be disqualified from the Derby. His Derby win still hangs in the balance with a second test yet to be analyzed.
Maryland racing officials required Concert Tour and Medina Spirit undergo additional testing and monitoring as conditions to run in the Preakness. Those three rounds of tests came back Friday, clearing them to race.
With Baffert’s shadow hanging over the race, the Preakness was run in front of a limited capacity of 10,000 fans, a fraction of the crowd of 100,000-plus that typically packs Pimlico on the third Saturday in May. Masks were still required because of city and track protocols.
This was a short turnaround from the 2020 Preakness, which was run last fall as the third leg of the Triple Crown with no fans allowed.