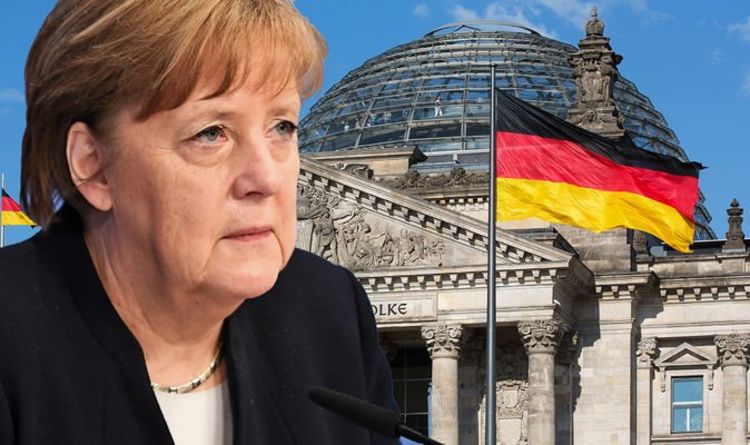 German Chancellor Ms Merkel has previously said she will step down from her leadership role after nearly 16 years. But just four months ahead of the crucial election, her Government have suffered a new blow. A poll from the Allensbach Institute for Demoscopy of 1,028 people between April 23 and May 6 revealed two-thirds are calling for a new Government, while more than 67 percent want “different policies in many areas”.
The poll also revealed around half of those surveyed would like a clear coalition statement from the parties, while the remaining half does not consider this to be a priority.

Only a fifth (20 percent) are in favour of Germany possibly having a minority Government, while 57 percent want new elections if the winning result is not enough for a stable majority.

Environmental and climate protection are cited as the most important issues when it comes to the need for a different policy, with more than 55 percent believing there should be a change in direction on this topic.

Just over half would like a different refugee and integration policy, while this is followed by pensions, education, fighting the coronavirus pandemic and the housing market.

Allensbach differentiated according to party affiliation on the refugee policy, and the poll showed supporters of the CDU, AfD and FDP consider this to be the most important of all.

The refugee policy from Ms Merkel came in for heavy criticism from rival political parties, so there is little to suggest those surveyed in this poll have changed their minds.

For the majority of men, the issue of refugees is considered most important, while for women it is climate protection.

When compared regionally, in eastern German states the demand for a new refugee and integration policy is considered a priority, and in the western states it is climate policy.

In another blow to Ms Merkel last week, Germany was warned in inflation could jump to above three percent as the German Chancellor’s time at the top ends in chaos.

But Isabel Schnabel, a German economist who is also currently serving as an executive board member of the European Central Bank (ECB), said this increase would be comparable to the bank’s strategy and would not require any change in the currently extremely loose monetary policy.

The financial expert told NTV in Germany: “What we are seeing is that the pandemic has caused very pronounced fluctuations in inflation.

“You could see that inflation plummeted massively into negative territory last year, and this year we saw that there was a sharp rise in inflation.

“That will go even further. In Germany, we anticipate that inflation may well exceed three percent.”

Ms Schnabel was also asked if there is any route out of the expansionary monetary policy.

“You have to prepare for it, especially through communication, so that everyone has the opportunity to gradually adapt to it.”