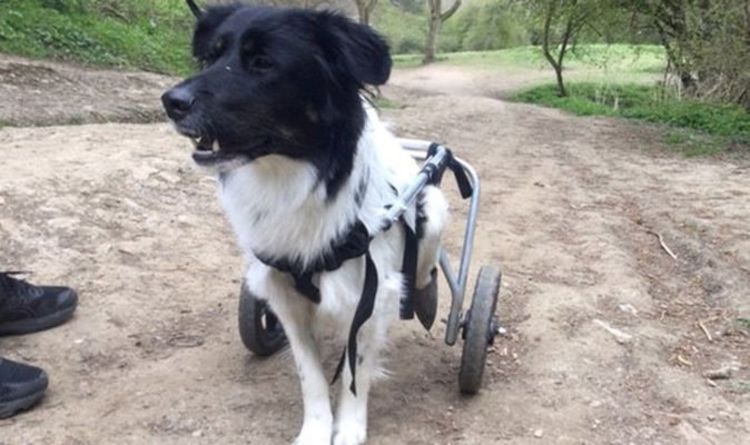 The pooch, named Janja, was left traumatised after being abandoned at a rubbish dump when she was just weeks old. She was then diagnosed with a broken back after a Good Samaritan found her and took her to the vet for an assessment.
Vanda, the dog’s rescuer, was initially told that Janja needed to be put down as her injuries meant she would never walk again and would always be incontinent.

Janja’s enormous spirit made Vanda decide she should be given a second chance at life, as she had fought so hard to survive her ordeal.

The pooch was given laser acupuncture and a wheelchair for her back legs so that she could continue to move freely.

Despite Vanda’s best efforts, the dog quickly became increasingly difficult for her to look after alone, so she sought out the help of a group of foster carers.

As Janja’s incontinence worsened, the couple were forced to spend vast amounts of time cleaning up the mess and the dog.

Ms Leeson said: “Life is good for her, but Julia and Glen are struggling, much as they love her dearly.

“They so want to commit their lives to care for Janja but it is exhausting and they need help.

“Although no one ever wanted this, she is used to being in different foster homes back in Croatia and took it all in her stride.

“We are asking for just one other foster home to commit to caring for her on a one month on, one month off basis.

“Janja is a dear sweet girl who has had the worst start in life ever and has come through everything life has thrown at her still full of joy and happiness. She loves other dogs, children and everyone she meets.

“We are looking for another ‘animal angel’ somewhere out there who can devote part of their lives to such a deserving and fun-loving, adorable dog who, despite her broken body, never gets her down and who loves life so much.”