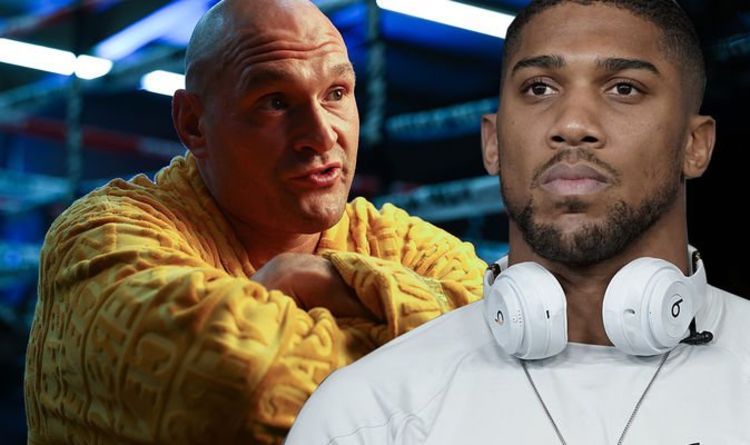 Anthony Joshua‘s blockbuster August 14 bout with Tyson Fury is reportedly at serious risk of being called off because of Deontay Wilder, just over 24 hours after Fury posted to declare the fight on in Saudi Arabia later this summer. Fury and Wilder have been locked in an arbitration case for several months with team Wilder looking to have come out on top.
Fury and Joshua are currently due to become the first heavyweights ever to put all four belts on the line, with Joshua owning the WBA, WBO and IBF straps and Fury having been the WBC champion for the last 15 months.

The British duo are bidding to become the first undisputed champion of the division since countryman Lennox Lewis in 2000, though he did not hold the WBO belt, which was not mandatory to be the heavyweight king at that time.

Yet the Daily Star report the mega-money scrap is now at serious risk of having to be cancelled with Fury having been ordered to fight Wilder for a third time this coming summer.

The arbitration court is said to have ruled in Wilder’s favour and said that Fury has to be involved in a trilogy fight due to contractual obligations.

The Gypsy King defeated Wilder in dominant fashion back in February 2020 in Las Vegas in a thrilling throwdown after the first had ended in a contentious draw.

Fury was contracted to go head-to-head with the American a third time but delays caused by Covid-19 meant that the fight never came to fruition, either in the summer or before Christmas.

After Fury’s negotiations to fight an alternative opponent in December collapsed, he moved his attentions towards an undisputed battle with Joshua.

However although it has been declared that the fight is on, the site deal has yet to be officially finalised with Saudi officials willing to pay as much as £108m, per the Star, to secure the rights to host it.

Fury’s team are said to still be awaiting the proper documentation to guarantee him the funds from the deal.

And the ruling from judge Daniel Weinstein that Fury must fight Wilder again may now push back the hotly-anticipated all-British battle until later in the year.

It has been ruled that yet another rematch between Fury and Wilder must take place even though the former’s team felt the Bronze Bomber’s right to a trilogy scrap had expired.

That is because the contract stipulated that a third fight must take place by July 2020, although the ability to do so was of course impacted by the coronavirus pandemic.

The Star say it is unclear whether or not Fury’s team can now appeal the decision of Weinstein.

Fury only confirmed the long-awaited fight against Joshua would be happening in a video posted on his Twitter account on Sunday.

He said: “Got some massive news for you all guys. I’ve just got off the phone from Prince Khalid of Saudi Arabia, he’s told me this fight is 100 per cent on.

“This is going to be the biggest sporting event ever to grace the planet earth. Do not miss it. All eyes on us.”

Fury followed that up by tweeting on Monday alongside a graphic of him dubbed ‘Tyson of Arabia’: “Time to take back what I never lost. Every belt there all mine chump!”

Yet it looks as though he may have to come through a fight with Wilder once more in the latest of a long series of delays to Joshua vs Fury.