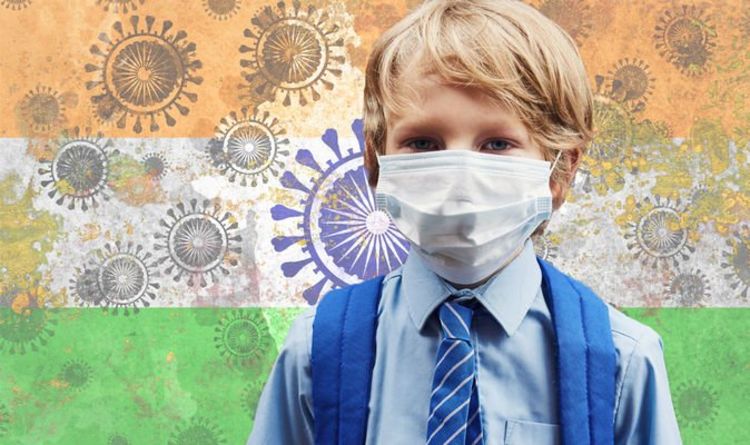 The Indian Covid variant is set to become the dominant strain in the UK within days, say experts. The variant is said to be more transmissible than other strains and threatens to reverse moves to ease lockdown. In Singapore, all primary, secondary and junior colleges will shift to full home-based learning from Wednesday until the end of the school term on May 28 as it’s believed the variant is affecting more children than past strains.
The B1617 strain, which has been called the Indian variant, appears to affect children more, according to Singapore’s Health Minister One Ye Kung.

“He did mention it will appear the B1617 strain appears to affect children more.

“So you’ll notice that for schools the response has been different compared to say last year.

READ MORE: Type 2 diabetes: The sensation in your head warning your blood sugars are too high

“So once we detect infection, but outside of school, the Ministry of Education (MOE) has been very fast actually to put the school on home-based learning for the next few days and test the entire school.

“So that is also a precaution that has been put in recently in view of the different behaviour of this strain of virus.”

Birmingham’s public health chief said there was emerging evidence to suggest the Indian variant posed a “significantly” greater threat to young adults than any previous variant, and the new variant could also be a greater threat to children.

Speaking at a council Health and Social Care Overview and Scrutiny Committee at the end of April, he said: “There are certainly disturbing images and information coming from India at the moment that suggest that the variant is a significantly greater threat to younger adults than any previous variants, so we are taking it very seriously.

“And it is very important that anyone that has returned from India or the surrounding regions takes the quarantine guidance incredibly seriously and takes the tests that are part of the quarantine protocol.”

He added: “I do fear the Indian variant, like the Brazil variant, is a vary clear and present danger to our current roadmap, and therefore we have to take it very seriously.”

There are now 2,323 confirmed cases of the Indian variant in the UK.

Health Secretary Matt Hancock told the House of Commons: “There are now 86 local authorities where there are five or more confirmed cases.”

Bedford is fast becoming a hotspot for the variant.

But early data suggests the Covid vaccines still work against it.

A new study has shown the AstraZeneca vaccine to be 97 percent effective.

The Covid vaccines developed by Pfizer/BioNTech and Modern appear to be effective against the Indian variant, the European Medicines Agency (EMA) said last week.