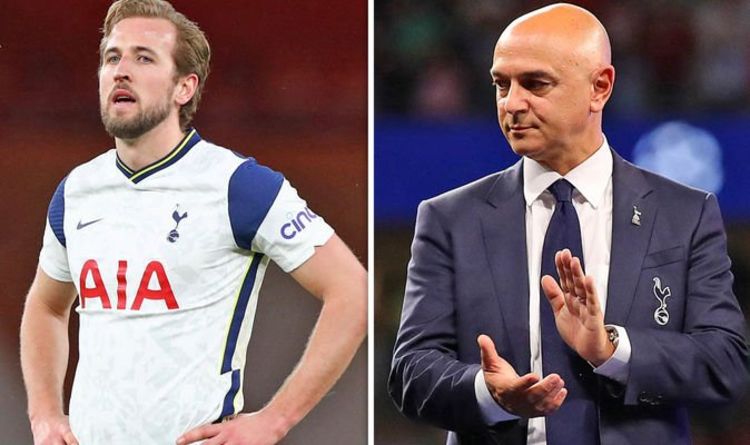 Tottenham star Harry Kane is heading for a collision course with Daniel Levy after telling the Spurs supremo he wants out, reports say. The England international is the Premier League’s top scorer with 22 goals to his name. And he wants to win team trophies now, with Manchester United, Manchester City and Chelsea all in the mix to secure his signature.
On Monday, reports emerged suggesting Kane was ready to leave Tottenham behind.

It’s claimed he’s informed the Spurs hierarchy of his determination to seek a new challenge elsewhere, after seeing the club toil under both Ryan Mason and Jose Mourinho this term.

Kane has been a shining light amid a problematic season for Tottenham, managing 35 goal involvements from 33 top flight matches so far.

A summer scrap now seems likely, with several clubs in for him.

Manchester United recently handed Edinson Cavani a new contract but, despite that, could pounce for the 27-year-old.

Manchester City are on the lookout for an heir to Sergio Aguero, whose move away from the Etihad Stadium has already been announced.

And with Chelsea primed to cut the likes of Tammy Abraham and Olivier Giroud loose this summer, Kane is seen as the perfect upgrade.

The Guardian state, however, that Kane may find securing a move away from Tottenham difficult.

It’s claimed he felt there was an ‘accepptance’ from Levy 12 months ago that, if he provided the north London giants with another year of dedicated service, he’d be allowed to leave.

But it’s claimed Levy may now dispute this.

Kane has three years left to run on his six-year contract that he penned in 2018, meaning Tottenham are under no obligation to cut their talisman loose.

It also gives Levy a platform to demand a huge fee for the his star striker, who hasn’t won a single trophy during his professional career so far.

And Levy’s stance has long been that Kane isn’t for sale.

With a collision course now possible, the England international may have to kick up a fuss in order to get a move away.

Tottenham have previously only cashed in on their best players when they’ve forced their hand, such as Gareth Bale and Luka Modric.

And what ultimately happens with Kane remains to be seen.

Speaking last month, the Three Lions star admitted he wanted to win trophies of the highest order – and that they meant more to him than individual awards.

“I spoke openly about [winning silverware].

“That’s the reason why I play the game, that’s why I became a footballer – to win and have those experiences with my team-mates, lifting trophies and winning the biggest games.

“It hasn’t happened so far but I feel I’ve got plenty of time in my locker.

“I’m just looking forward and I’m sure they will come.”

Before that, he said: “When I look back at the end of my career, these are all the things I’ll go over and take in a little bit more, but the goal right now as a player is to win team trophies.

“As much as this is great, I want to be winning the biggest team prizes.

“We’re not quite doing that. It’s bittersweet, but it is what it is.

“I’m proud to win [Premier League Player of the Year], it’s been a good season on the pitch.”