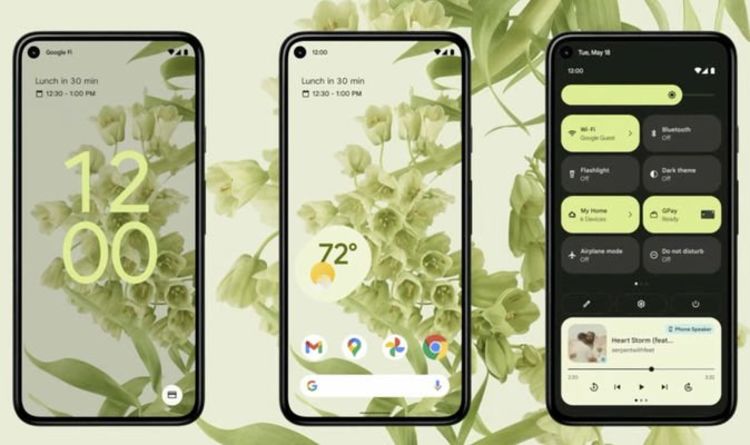 Google fans have just been given their very first glimpse of what’s to come in Android 12 and this is one of the biggest changes to this popular operating system in years. The US technology firm took the wraps off this shiny new software during the opening keynote at its IO event and there are a whole bunch of updates that look pretty exciting.
Perhaps the biggest upgrade in Android 12 is the option to completely customise your phone. Now, we’re not talking about just switching on Dark Mode or changing the screensaver, as this new feature will give users complete control over colours, shades and styles.

Google is going to let users run wild with their phones changing the whole way things look and feel.

The firm is calling this new feature ‘Material You’ and it will even help you pick the perfect design thanks to clever AI. Using what Google calls colour extraction, users choose their wallpaper and the system will then automatically work out which colours are dominant, which ones are complementary and which ones will look the best on the homescreen. Things will then be transformed without the user touching a single setting.

Speaking about the change, Google said: “Android 12 includes the biggest design change in Android’s history. We rethought the entire experience, from the colors to the shapes, light and motion. The result is that Android 12 is more expressive, dynamic and personal than ever before.”

Along with that complete way to customise things there’s also some new additions to the drop-down Quick Settings menu which has been rebuilt to include Google Pay and Home Controls, while still allowing for customisation so you can have everything you need most in one easy-to-access place. Google will also let users instantly block apps from accessing the camera and microphone right from this menu. That’s pretty handy as you’ll instantly be able to see if an app is doing something in the background and the switch it off without digging into the settings menu.

Privacy is a main focus of Google right now with Android 12 including better ways to stop apps from tracking you across the web.

Android 12 includes new features that give you more transparency around which apps are accessing your data, and more controls so you can make informed choices about how much private information your apps can access.

The new Privacy Dashboard offers a single view into your permissions settings as well as what data is being accessed, how often and by which apps. It also lets you easily revoke app permissions right from the dashboard.

Google has confirmed that its Pixel devices will be the first to get Android 12 in the autumn.

Google is announcing more at its IO conference so check back for more details.