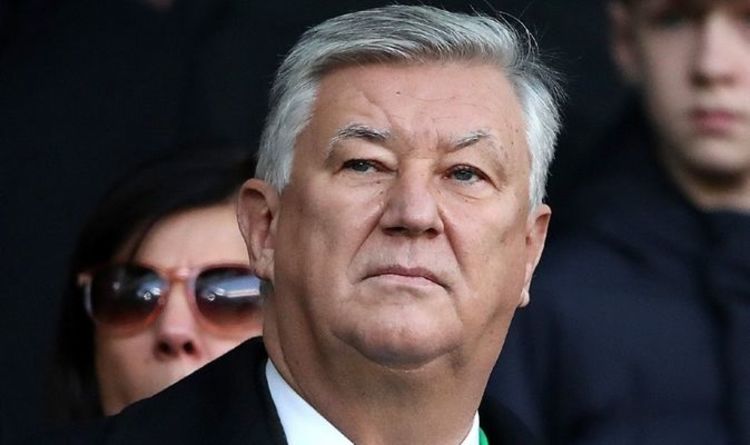 It is understood an explosive device was thrown at the football chief’s car where it exploded and spread fire to his home. The attack came in the early hours of the morning while Mr Lawwell and his family slept. The blaze quickly overwhelmed his luxury residence on the south side of Glasgow.
Celtic Football Club said in a statement: “We can confirm that significant damage has been caused to Peter Lawwell’s house and vehicles there, following an explosion and fire early this morning, forcing the family to leave the property.”

A Scottish Fire and Rescue Service spokesperson added: “We were alerted at 1.02am on Wednesday, May 19 to reports of a car on fire outside a dwelling on Peel Road, Thorntonhall, Glasgow.

“Operations Control mobilised eight appliances to the scene to extinguish the fire, which was affecting a number of cars as well as the detached two-storey property.

“There are no reported casualties.

The violence this morning comes as Rangers won their first league title in a decade.

Following the title win, Nicola Sturgeon claimed she had been left “disgusted” by the behaviour of some of the club’s fans.

On Sunday, large numbers of police were called in to control fans who had gathered to celebrate the title win.

“I’m also angry on behalf of every law abiding citizen. In normal times, the violence & vandalism, and the vile anti Catholic prejudice that was on display, would have been utterly unacceptable.

“But mid-pandemic, in a city with cases on the rise, it was also selfish beyond belief.

“People across the country still living under the most difficult restrictions – not able to see family or attend weddings and funerals – are rightly furious at the irresponsible actions of a thuggish minority who seem to care little for the risks they pose to other people.

“That said Police Scotland officers have my admiration and thanks for the job they did in difficult and dangerous circumstances.”

Twenty-eight arrests were made during the clashes while five police officers were also injured.

Police are also investigating claims of “sectarian language” used in a video which circulated on social media.

A statement from Rangers said: “We are aware of a video circulating on social media.

“It is evident that this video was shared with an adjoining narrative which attempts to discredit our players and the reputation of Rangers Football Club.

“This highlights the dangers of ‘trial by social media.”