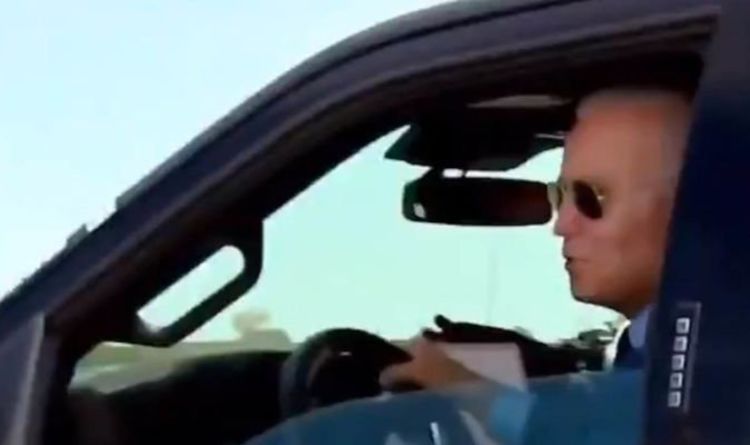 US President Joe Biden spoke to reporters while test driving the Ford F-150 Lightning at the carmaker’s factory in Michigan. A reporter asked: “Mr. President, can I ask you a quick question on Israel before you drive away since it’s so important?” He replied: “No you can’t. Not unless you get in front of the car as I step on it.”
He later added: “I’m only teasing” which reporters appeared to laugh at.

Fox News host Sean Hannity later said: “Imagine the moral outrage if it was Donald Trump but Biden, he always gets a pass.”

His comments were echoed by former Nevada GOP Chairwoman Amy Tarkanian who said: “Joe Biden just threatened to run a reporter over with a car for wanting to ask a question about Israel.

“If President Trump had done this, he would have been impeached. Jokingly or not, this rhetoric is completely unbecoming of the President.”

While Conservative podcast host Stephen L Miller wrote on Twitter: “Biden joking about running down a reporter for asking about Israel in an F-150 truck is a pretty good tell about just how performative the ‘how dare he’ fainting spells of the past 4 years actually were.’

“While America’s most important Middle East ally is under attack, Joe Biden threatened to run over a reporter for asking a question about it,’ National Republican Senatorial Committee campaign worker Jonathan Turcotte said.

“And this is the takeaway from the totally unbiased media. What a joke.”

At a rally in Dearborn, the heart of Michigan’s Arab-American community, over 1,000 people gathered a few miles away from Biden’s event and booed at mentions of the Democratic president’s name.

Israeli airstrikes have pounded densely populated Gaza day and night since the conflict flared on May 10, while residents in Israeli cities race for shelters or safe rooms, if they have them, every few hours or minutes to flee militant rockets.

Mr Biden has privately pressed for a ceasefire in the more than week-long conflict between Israel and Hamas, the Islamist group in the Palestinian territories. His aides have said they are aggressively pursuing behind-the-scenes diplomacy to bring the conflict to an end.

That is not enough for some Democrats, who want Biden to denounce the disproportionate casualties suffered in the Palestinian territories during the conflict and to reconsider the weapons and other assistance it provides Israel, Washington’s closest ally in the turbulent region.

Dawood Ali, 21, at the demonstration said: “He should not be supporting them.”

Ali, who voted for Biden, said he regrets doing so.

Speakers on the stage shared similar sentiments, saying they felt courted – and then disrespected – by Biden.

Reuters/Ipsos polling showed that Biden won Muslim voters by 8 percentage points in his 2020 race against Republican President Donald Trump, who had been a stalwart defender of Israeli Prime Minister Benjamin Netanyahu on all fronts.

Turnout among those voters in Michigan rose 6 percentage points to 71 percent in 2020 from 65 percent in the 2016 presidential race, according to Emgage, a Muslim-American voting group.