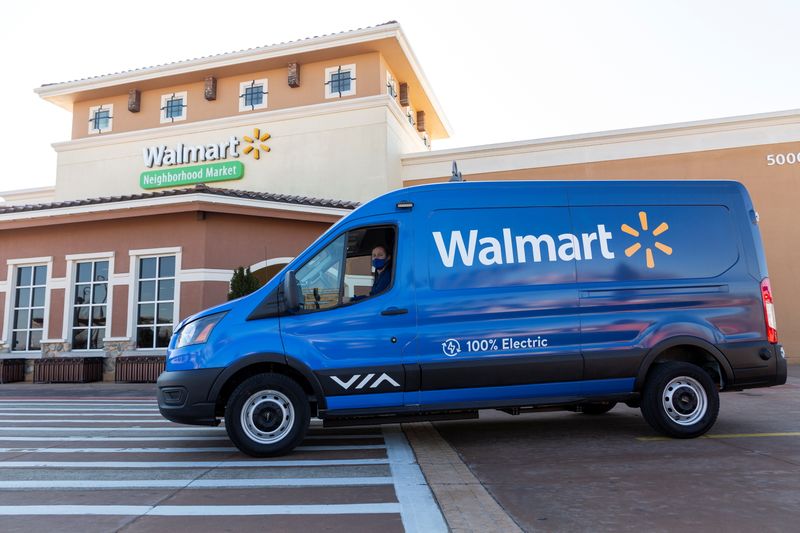 The move is just the latest example of how Walmart (NYSE:) Inc and Target Corp (NYSE:) are working to close the gap with Amazon.com Inc (NASDAQ:), the No. 1 online retailer. Amazon has recruited armies of small businesses to provide delivery services from vans emblazoned with the company’s logo – an effort that has helped it control customer wait times and costs.

UPS, FedEx Corp (NYSE:) and the USPS have been inundated with packages since the coronavirus pandemic hit U.S. shores last year – forcing retailers to seek new ways to get goods into the hands of customers while containing soaring delivery costs.

Since January, a small, electric van fleet has made package deliveries in the Bentonville and Rogers (NYSE:) areas near Walmart’s Arkansas headquarters, company spokeswoman Camille Dunn said. The drivers work for Walmart, which also employs its semi-truck drivers.

When asked about Walmart’s project, shipping consultant Cathy Morrow Roberson said: “Hallelujah. They can afford to build out a last-mile delivery network. They built out a trucking network.”

“I wouldn’t say that they get customers away from Amazon, but they can certainly put up a good fight,” she said.

Retailers are dealing with a trucker shortage that threatens their ability to stock their stores. However, van drivers in theory should be easier to find because they don’t require professional licenses like big-rig drivers do.

Target so far is depending on independent drivers from Shipt, which it bought in 2017.

The retailer earlier this year began testing home package delivery from a new sorting center in its hometown of Minneapolis. Workers in that center group packages by zone and hand some over to drivers for Shipt, who use their own cars for deliveries.

Walmart, Target and Amazon use gig workers to make same-day, local deliveries. Amazon’s service is called Flex (NASDAQ:). Walmart has its own Spark Driver delivery platform and taps on-demand services from companies such as DoorDash and Postmates. Target depends on Shipt and other providers.