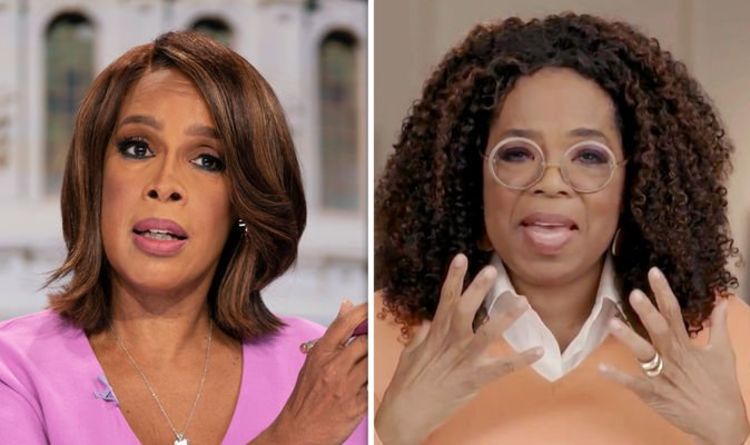 Oprah’s new AppleTV+ documentary with Prince Harry, entitled The Me You Can’t See, is coming out tomorrow. The programme will see Harry and other celebrities such as Lady Gaga and Glenn Close open up about mental health and the stigma around it. The Duke of Sussex will speak about the trauma of losing his mother Princess Diana and how he has been in therapy for four years now to work through the pain of his past.
This is the second collaboration Harry has done with Oprah now, after his bombshell interview with Meghan Markle earlier this year.

Harry and Meghan have been friends with Oprah for several years, giving her a prime pew at their wedding three years ago.

They are also friends with her CBS colleague Gayle King, who went to Meghan’s baby shower in New York two years ago.

Oprah Winfrey and Gayle King are known to be best friends, but even close friends can get on each other’s nerves if they spend too much time together.

In a video from 2006, the two TV legends were filmed taking a road trip, where they had to drive for many hours at a time and started to bicker.

Gayle said: “All you had to do was just ride today and listen to my singing, which should have been very pleasurable and enjoyable and relaxing for you.

“I’ve been driving for six hours, all she’s had to do is just sit here and relax and she’s b****ing!”

Oprah hit back that the singing was “why I’m so cranky”.

They had been driving for hours in Arizona and it was around 6pm when they took shots at each other.

Gayle then started to sing: “But we’re healthy, we’re happy and seeing the USA in a Chevrolet, America’s waiting for your call!”

Oprah giggled but warned: “You had better be quiet.

“Because I have to sit here for six hours and take in other people’s energy.”

Gayle said: “She’s just cranky and b****ing and getting old and Oprah nobody cares because we’re all frigging tired.”

That night, after 11 hours in the car, the pair stayed in a motel called the Wigwam Hotel in Holbrook, where the rooms were all shaped like teepees.

The pair dropped all the animosity they were feeling in the car and just laughed together when they saw it.

When asked whether they wanted to fill out a registration car separately or together, Gayle said: “Separately. We’re not a couple, despite what you’ve heard.”

The sweet woman running the motel explained that her father had built all the teepee motel rooms himself 55 years before.

Oprah joked that she wanted her “wigwam” at the other end of the “village” from Gayle.

The woman joked: “That can be arranged.”