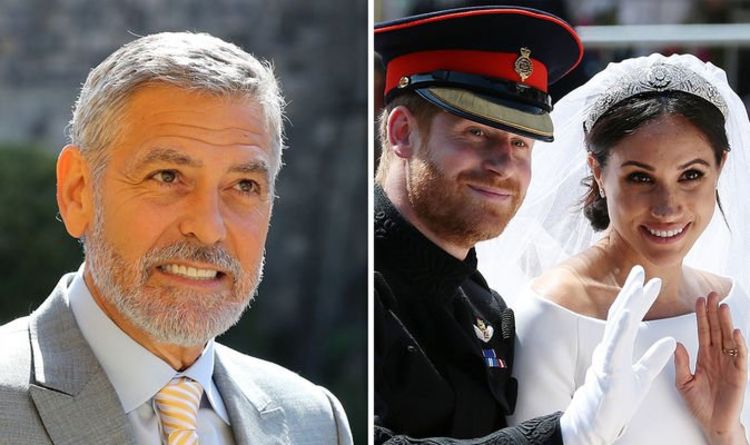 Prince Harry and Meghan are celebrating their three-year wedding anniversary today. In 2018, the pair tied the knot in Windsor, an event attended by George Clooney and his human rights lawyer wife, Amal. Not only were the Clooneys invited to the main event at St George’s Chapel, they were also asked to attend the exclusive evening reception at Frogmore House.
George disappointed fans when he denied reports he had danced with “everybody”, insisting he didn’t dance at all.

Attending a ceremony where he received a Lifetime Achievement Award by the American Film Institute at the Los Angeles’ Dolby Theatre, he said: “There were lots of stories, I heard I danced with… everybody.”

“There wasn’t beer pong. I heard there was beer pong, no beer pong.”

Tennis star Serena Williams, who also attended the wedding, had already denied that there had been a beer pong contest, despite reports she had won.

Talking to an AP reporter at the French Open in 2018, she said the claim was “not even remotely true”, adding that she doesn’t “even drink beer”.

She was not annoyed about the reports, however, admitting that she and her husband, Reddit founder Alexis Ohanian, had a “big laugh” about it.

There were also reports that George Clooney coaxed guests to the bar and made people laugh by free-pouring shots of tequila at the reception.

The Hollywood star has created his own brand of the spirit called Casamigos, through which he has another royal connection; Princess Eugenie’s husband Jack Brooksbank is its brand ambassador.

In the book ‘Finding Freedom’, co-authors Omid Scobie and Carolyn Durand wrote: “George Clooney was also on hand to help.

“Coaxing people to the bar, he had partygoers laughing as he started free-pouring shots of Casamigos tequila, the liquor brand the movie star co-founded.

“‘I wanted to make sure everyone had the best time,’ Clooney said.”

While journalist Rachel Jonhson claimed the Clooneys did not know the Sussexes very well at the time of the wedding, they have since seen each other on a handful of occasions.

The Clooneys invited Meghan and Harry to their villa at Lake Como, and to their home in England twice.

Meghan also invited Amal Clooney to her baby shower in New York in 2019, when she revealed to the lawyer that she was having a boy.

Finding Freedom was written by Omid Scobie and Carolyn Durand and published by HQ in August. It is available here.