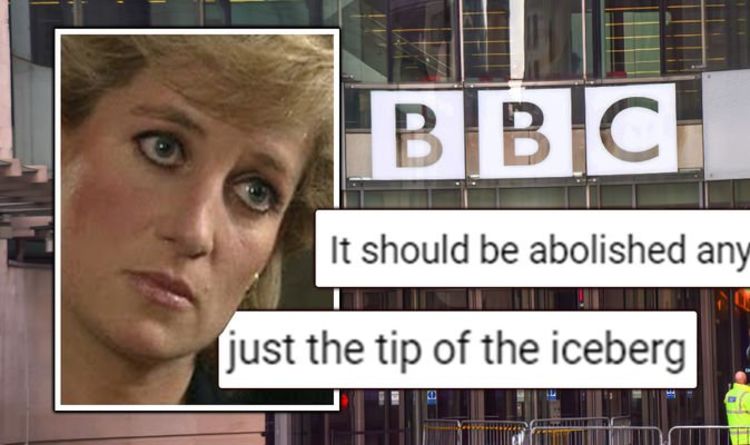 Ninety-eight percent of people said in an exclusive Express.co.uk poll that the licence fee should be abolished following what was described by the corporation’s director-general as “a dark day for the BBC”. The Beeb has come under intense pressure after an independent inquiry into how the broadcaster secured the bombshell 1995 interview found that journalist Mr Bashir lied and deceived to persuade the royal to speak to him on camera.

In a separate statement, Prince Harry hit out at the “ripple effect of a culture of exploitation and unethical practices (which) ultimately took her life.”

The Metropolitan Police said they would “assess the contents” of Lord Dyson’s investigation to ensure there is no “significant new evidence” to support a criminal investigation.

As criticism rolled in, calls grew louder for the TV licence fee to be abolished and Express.co.uk conducted an exclusive poll to gauge readers’ feelings on the topic.

Asked if the BBC should end its annual licence fee policy, the overwhelming majority (98 percent; 5,816) said it should while only 2 percent (120) believed it should remain in place.

Only 25 respondents (less than 1 percent) said they didn’t know.

In comments, many readers were outspoken about their strong feelings on the controversial licence fee policy.

Many people said they could think of other reasons why the broadcaster should stop charging Britons to watch the box but the Bashir scandal was too much to stomach.

READ MORE: Prince William threw ‘out of the window’ the Queen’s royal mantra

And one urged other TV viewers to “resist this nonsense” and simply refuse to hand over their cash in exchange for watching TV.

They said: “You don’t need a licence to watch TV. Resist this nonsense and do not give the BBC a single penny of your money.”

However, despite the vast majority of readers polled backing calls for the licence fee to be scrapped, others were more sympathetic to the BBC.

One reader argued that the entire corporation should not be punished for the actions of one of its journalists.

Mr Bashir quit his job at the Beeb earlier this month on health grounds.

The reader wrote: “It’s Bashir that is the main offender here. They need to go after him.

“When I was in the Armed Forces I used to get very fed up when people said, ‘The Army’ has done this terrible thing to me.

“It wasn’t the Army, it was some bloke in a position of power that needed to be held to account. This falls into the same category.

“Don’t hit out at the organisation, find the individuals that are doing wrong.”

In 1996 the BBC conducted an internal investigation into Mr Bashir’s interview with the Princess of Wales which Lord Dyson’s said in his report was “woefully ineffective”.

Former BBC executive Tim Suter, who was part of the investigation, stepped down from his role with Ofcom, the broadcast regulator announced on Friday.

The BBC and Mr Bashir have both apologised for their conduct, and the corporation has written apology letters to Prince Charles, Prince William, Prince Harry and Princess Diana’s brother Earl Spencer.