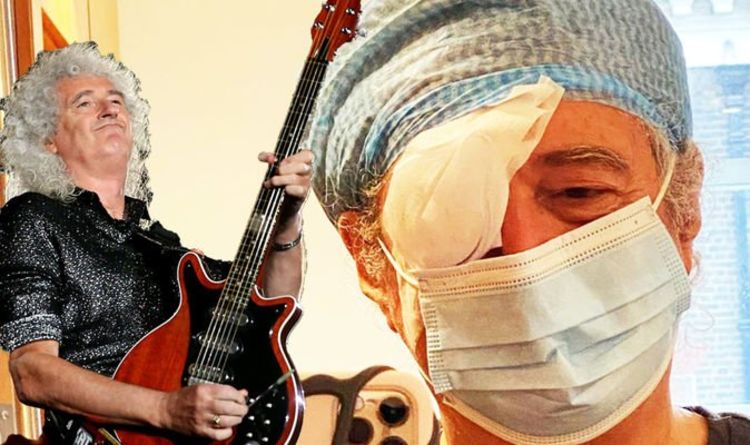 The 73-year-old has been back in hospital again. Last year Brian revealed he had “nearly died” from a “stomach explosion.” He also had a “small heart attack” the same year. This is on top of spending the end of 2019 in hospital for a corrective operation on his achilles tendon. The Queen star has always kept his loyal fans involved with every aspect of his life and this latest time is no different – complete with a Queen-related pun.
The verteran rocker posted the first images yesterday on Instagram before he went in for his newest surgery.

He told fans: “One Vision ! All prepped and waiting … for a little bit of eye surgery. I’m in good hands. No need to worry. All in a day’s work … it should really improve my focus – AND my stereoscopic vision. It’s a Piece o’ Cake … eeek ! Bri”

And now he has posted a post-op update, reassuring everyoine he “didn’t feel a thing” and was actually awake through the entire proceedure.

The star posted the image of his bandaged left eye with another typically ‘Bri’ pun about his new ‘iPatch’.

Brian wrote: “And …. all done !! I really didn’t feel a thing. It was all done with local anaesthetic and a tiny bit of sedation.

“So I was conscious throughout the whole thing – and fascinated by this amazing procedure. Only about 20 mins.

“The patch stays on until tomorrow morning. It’s an iPatch ! So obviously I’ll soon have to take it off and put it back on again.”

The Queen legend is well-know for his philosophising on his site, and also took the chance to also reflect (literally) on the way we all see ourselves.

Brian’s achilles tendon operation was to improve his comfort and mobility on stage but fans will have to wait until next year to see the completion of the postponed Uk and Europe leg of the Queen + Adam Lambert Rhapsody World Tour.

In the meantime, the band has been celebrating their 50th anniversary with the corresponding number of new  ideos.

Each week on teh official Queen Youtube page, a new video will be released focussing on an iconiomic moment from the band’s extarordinary history.

This week’s release  looked at the legendary 1986 HYde Park concert that almost resulted in Brian being arrested along with bandmates Freddie Mercury, JOhn Deacon and Roger Taylor.