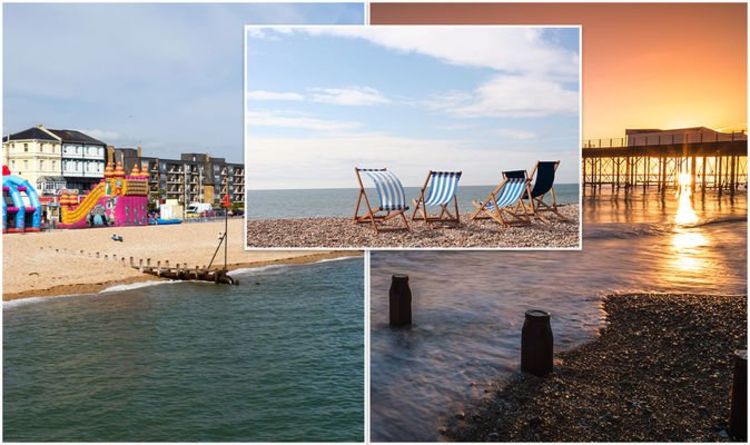 UK holidays have been in full swing since April 12, and as international travel restrictions remain ongoing many Britons may be considering swapping their overseas jaunt for something closer to home. While the UK isn’t renowned for having the scorching temperatures a European beach holiday may provide, there are some locations that do offer more sun than others.
New research collected by experts at Evans Halshaw used weather and travel data for 1,000 UK destinations in order to find out which holiday hotspot promised the sunniest days.

The seaside towns of Bognor Regis, in West Sussex, and Folkestone, in Kent, came out on top.

Both were found to have an average of 194 hours of sunshine each month and an average maximum temperature of 16 degrees.

They were followed closely by Eastbourne and Newhaven, both in East Sussex, in joint second/third place with 192 sunshine hours and an average maximum temperature of 16 degrees.

However, Margate was found to have a slightly higher average temperature, sitting one degree higher than Herne Bay at 16 degrees.

The top ten list was concluded with Poole, in Dorset, in ninth place and Clacton-on-Sea, on the Essex Sunshine Coast, in tenth.

The Dorset town was found to offer an average 181 hours of sunshine each month and an average maximum temperature of 16 degrees.

Clacton-on-Sea, much like the majority of the top ten, also offers a 16-degree average maximum temperature, alongside 180 average sunshine hours per month.

While most of the towns are located on the coast, the experts also discovered the sunniest inland destination, for those hoping to steer clear of the sea.

The data revealed Windsor, a town widely recognised for being a residence of the royal family, offers favourable temperatures and plenty of sun-filled days.

The research also discovered which locations Britons are most likely to be rained on during their break.

According to the experts Port Glasgow, in Scotland, topped the list of rainiest staycation haunts.

Kim Costello, Chief Marketing Officer for Pendragon, which owns Evans Halshaw, commented: “With continued restrictions on international travel many people will be considering a staycation this year rather than travelling abroad.

“Our data helps to highlight some of the UK’s favourite holiday locations, as well as, unveiling a number of hidden gems which offer a great alternative to the traditional British break.”

The top 10 “sunniest” UK staycation destinations are as follows: