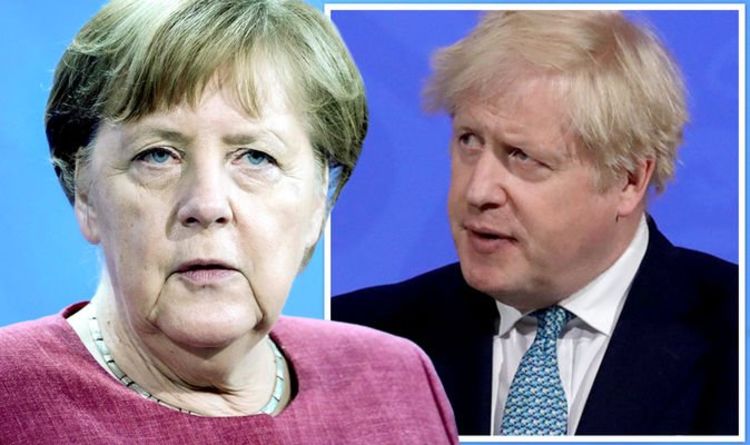 Germany’s public health institute issued new Covid rules requiring anyone travelling into the country from the UK to quarantine for two weeks on arrival. Cases of the Indian variant have been surging in localised hotspots including Bedford, Bolton and Blackburn, but the Prime Minister has pushed on, stating there is no reason to deviate from the current lockdown roadmap.
Speaking about the country’s latest quarantine rules, a German government source told Reuters news agency: “We want to play it safe.

“In this important phase of the vaccination campaign, the entry of problematic mutations must be avoided as far as possible.”

The new legislation takes effect from midnight on Sunday (11pm GMT Saturday) and even applies to those who have been fully vaccinated.

German officials are approaching lockdown easing with caution after breaking the back of a third wave earlier this month.

A spokesman for the Health Ministry said: “If we want to keep pushing down infection rates, we need to prevent contagious viral variants from jeopardising this positive trend.

“This step is hard for the UK, but it is necessary to prevent the rapid spread of the Indian variant in Germany.”

He added that Germany will be armed against such a danger only when more people have been vaccinated.

According to Johns Hopkins University, Germany has administered over 43 million jabs – with 10 million people being fully protected.

German Chancellor Angela Merkel previously warned that, although Covid cases were declining, “the virus has not disappeared.”

The hospitality industry has recently reopened in Berlin, with beer gardens, cafes and restaurants returning to outdoor service for the first time in months.

Ms Merkel added: “I hope that, after the long time with closures and opportunities they didn’t have, that people will treat these opportunities very responsibly.”

In the UK, Boris Johnson’s roadmap out of lockdown is progressing without interruption despite the Indian variant concern.

International travel reopened last Monday, much to the delight of Brits looking to get away for the summer.

In a statement on May 20, Mr Johnson said: “We will be letting everybody know exactly what sort of arrangements to expect for June 21.

Germany’s decision comes shortly after a new variant of the virus with a “strange combination” of genes was discovered in Yorkshire and the Humber.

The newly discovered Yorkshire variant, also called the VUI-21MAY-01 or AV.1 variant, is not believed to be more transmissible than other strains from India and is currently “under investigation”.