Review: Rise of the Slime – Slay The Spire Lite, With Tiddly Text

Forget the Age of Aquarius (what do you mean, you already did?) — this is the age of the roguelike deckbuilder. If you’re into cards, procedural generation, dungeon crawling and turn-based combat, then buddy, you’ve come to the right review, because Rise of the Slime is all of those things.

Yes, if you’ve enjoyed the likes of Slay the Spire, Dicey Dungeons, Hand of Fate, Thronebreaker, and Nowhere Prophet, then it’s time to add Rise of the Slime to your deckbuilder bucket list. Made by a solo Latvian developer, it’s centred around the story of one underdog (underslime?) who’s trying to, erm, go… somewhere? Or be the King? Something to do with a crown?? Honestly, story seems pretty light in this one, but we’re not playing deckbuilders for plot, right?

Rise of the Slime ticks a lot of the deckbuilder and roguelite boxes: moving from room to room, defeating varied parties of enemies with different strengths and weaknesses, winning cards to bulk up your deck, and occasionally finding “mutations” that will add buffs or conditions to your run. And, for the most part, the selection of cards, playstyles, mutations, and enemies will keep the game ticking along quite nicely indeed. 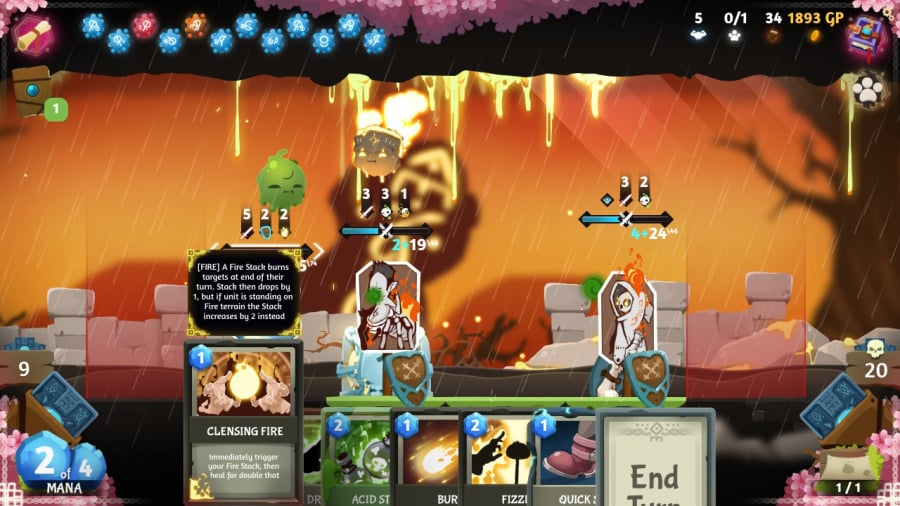 At the beginning of each run, you can choose to spec into poison, fire, or just straight daggers-and-shields, much like Slay the Spire, and each of these classes will offer unique cards to pick up as you go. However, you can seemingly get cards from any class no matter what you choose at the beginning, so you can also mix-and-match as you see fit.

A vital part of the deckbuilder oeuvre is being able to strategise, and that means being able to check out stats, read the details on a card, or have a quick explainer to tell you what it means for an enemy to be Hasted. Rise of the Slime pulls from a lot of other, similar games with the way its cards and combat work — no shame there, there’s no need to reinvent a very good wheel — but it doesn’t seem to be optimised for the Switch.

The most egregious example of the ways Rise of the Slime doesn’t quite suit the platform is the teeeeeny tiny text. At least when playing on handheld mode — which is ideal for short bursts of play, if we didn’t have to put our faces an inch away from the screen — the text is the most minuscule font size possible. There are plenty of other tiny text offenders on Switch, but if this print were any smaller, it would only be readable by lawyers. It’s better on the big screen, but even then, there’s a lot of white-text-on-light-grey-background, and use of typefaces that aren’t always easy to read. 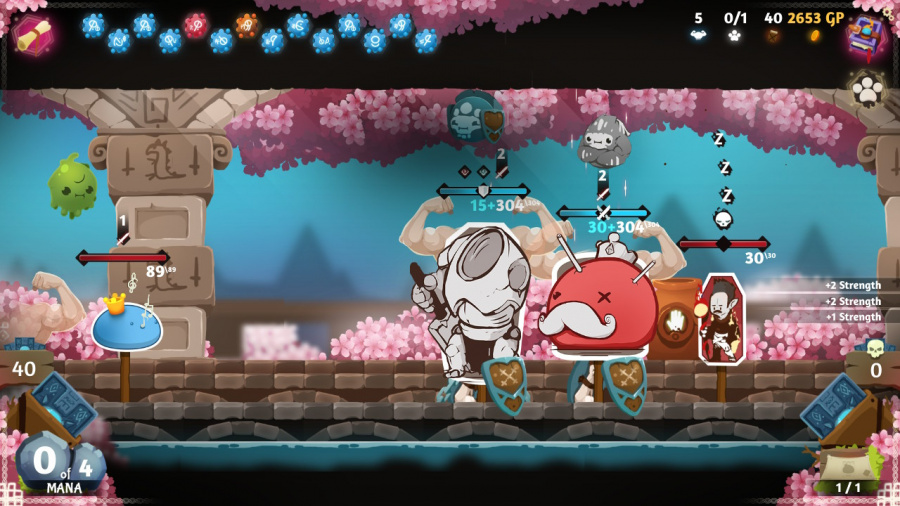 And there’s a lot of text in this game. Every single card, plus the enemy’s information, and even a lot of the menu options is presented in this itty-bitty writing, like you’ve accidentally selected “Optometrist Mode” at the beginning. Our second nitpick makes it a little worse, too, because Rise of the Slime is quite clearly intended to be played on the touchscreen — which means your big ol’ sausage finger getting in the way as you try to read the tiny text is just another obstacle to contend with.

Now, we tried to play Rise of the Slime with a controller, but the game kept switching arbitrarily between control stick and D-pad for movement and selection, and every card needed to be selected, targeted, and selected again, even the “End Turn” one. Also, a few of the controls — like looking at an enemy’s stats, or opening a card pack — were hard to figure out. It was annoying, to say the least, and the touchscreen controls were much more accessible and easy to use.

But the Switch touchscreen is fickle, and we’d often find ourselves touching a card to read it, only to accidentally play it and waste our limited energy resource. Similarly, the movement mechanic means that you can only move two spaces at once, and there’s no way to undo it if you accidentally tap the wrong place. Which you will. A lot. 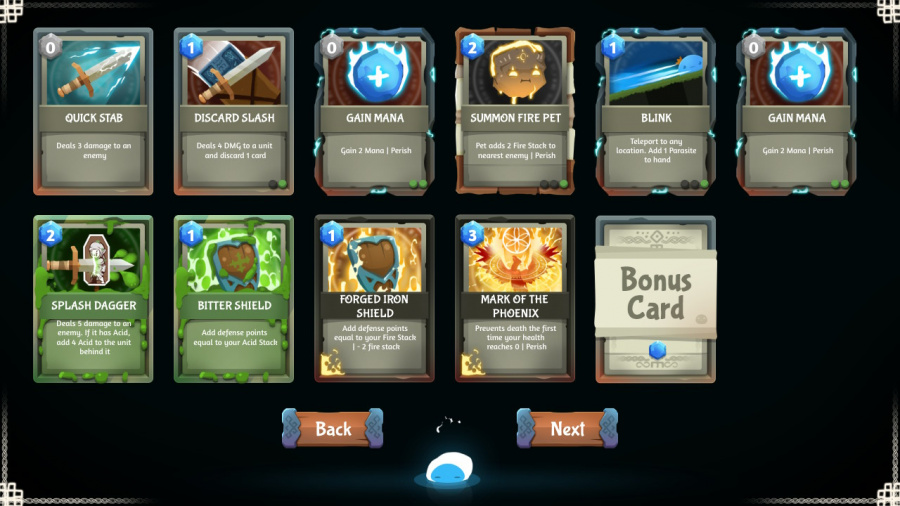 Aside from some sticky, fiddly controls and the tiddly text, Rise of the Slime gets it pretty spot-on. The metagame of which cards you want in your deck is almost as compelling as it is in Slay the Spire, albeit more limited; plus, we had quite a few battles where we managed to scrape a success with some sneaky strategy, which is always fun. There’s no permanence in the game; some roguelites will let you use currency to upgrade yourself permanently, like Hades‘ Mirror mechanic, but Rise of the Slime starts you from zero each time. In that way this has more or a traditional roguelike flavour, but that doesn’t necessarily mean you’ll like it.

The art is quite nice, and has a lovely layered depth to it, with a few charming details like the Slime whistling a little tune as he walks, and all the characters being cardboard cutouts on sticks. The writing is serviceable enough, though quite a few typos might grate on you if you’re the kind of person who doesn’t like to see spelling errors in a finished game. But there are still some balance issues, and some downright glaring faults, too, like when we spent all our money on upgrades for the next run, only to find that it didn’t take for some reason, and we’d just lost 4000 gold for nothing. The developer has promised updates and support, so this might be fixed at some point, but for us, it’s too late. 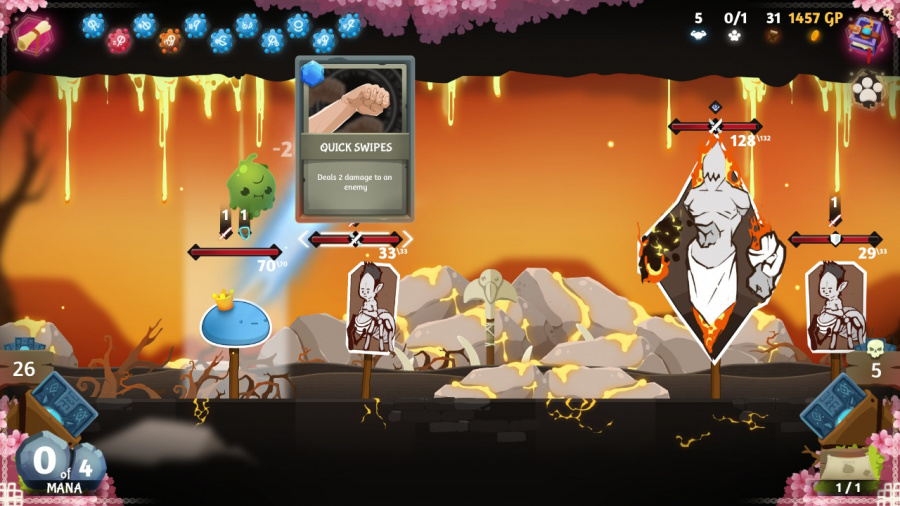 It’s worth knowing that Rise of the Slime is a pretty short game — we completed a run after just a couple of hours, and it seems like the idea is to do the run again, but with harder enemies, or change between “Challenge” mode (a continuous run with a difficulty curve), “Short Run” (a more casual, quick run that’s a little easier), or “Old Path” (which says it’s longer, but easier).

So, sure, Rise of the Slime won’t knock your deckbuilder socks off. It’s no Slay the Spire, but it’s not exactly trying to be — it seems to want to offer a more casual, cuter, bitesize version of the popular rogue-builder-deck-like genre. Diet Slay the Spire, if you will. It’s a shame it doesn’t play so well in handheld mode, unless you really like using a combination of touchscreen, controls, and slowly losing your eyesight, but for an evening of lighthearted, low-stakes dungeoneering, it’s a pretty nice snack.

Andy Forssell, WarnerMedia will be discussing HBO Max during Disrupt 2021

This high school group spent the summer analysing GeekWire 200. Here’s what they discovered

Seven Tips to Out-Talent Your Competition

Andy Forssell, WarnerMedia will be discussing HBO Max during Disrupt 2021

This high school group spent the summer analysing GeekWire 200. Here’s what they discovered