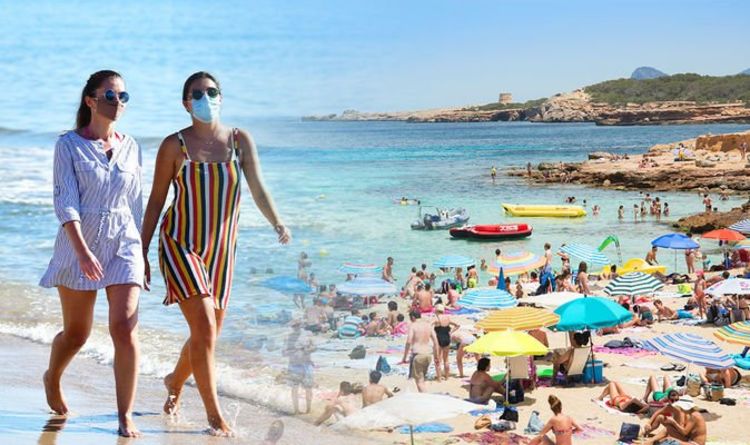 While Spain may still be on the UK’s “amber” list for travel, the holiday hotspot has announced it will be allowing Britons to enter the country for “non-essential” travel from Monday, May 24, 2021. In a further update, the Spanish Tourist Office in London has revealed the UK has been included in the list of exempted countries from which a negative COVID-19 diagnostic test is required from passengers before entering Spain.
This means travellers will not need to take a PCR test in order to enter Spain.

However, the rule will only apply to travellers from the UK who have remained in the UK for the previous 14 days.

Travellers entering from “risk” countries will be required to present a negative COVID-19 test result upon arrival.

READ MORE: How long do I have to quarantine after travel?

“Everything that means opening borders and trying to normalise mobility is good news.

“We are delighted with the announcement.

“The important thing now is that the UK puts us on green light status.

“We expect many British tourists will now come to Spain but green light status would encourage even more.”

Speaking previously, PM Boris Johnson said: “I think it’s very important for people to grasp what an amber list country is: it is not somewhere where you should be going on holiday, let me be very clear about that.

“And if people do go to an amber list country, they absolutely have to for some pressing family or urgent business reason, then please bear in mind that you will have to self-isolate, you’ll have to take tests and do your passenger locator form and all the rest of it.”

However, travel industry bosses have hit out at the Government for “confusing” rules when it comes to the “traffic light system”.

easyJet’s Johan Lundgren said: “We have a huge amount of people that are contacting us to say: ‘Look, can I go? Can’t I go?’

“So it’s been very confusing, and the Government is almost dismantling the system that it set up themselves.”