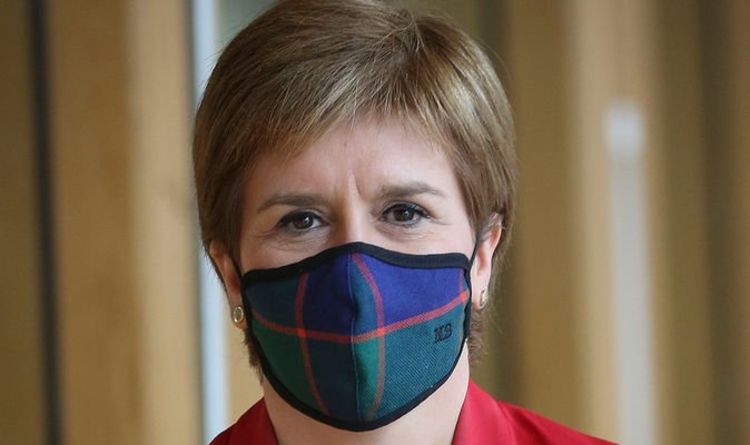 Addressing a press conference on Friday Ms Sturgeon refused to use the widely deployed term “Indian variant” for the new coronavirus strain. Instead, she insisted on calling it the “April 02” strain but proceeded to mention the “Kent variant” shortly afterwards.

Ms Sturgeon commented: “At this stage, and this is something that we have to remember, less than half of the adult population has had both of the vaccine doses.

“We have reason to believe that it might be more transmissible than the Kent variant which spread so rapidly, you will recall, over the winter period.”

“This anti-English sentiment does not reflect what Scottish people feel, especially since many of us live and work in England and have family in England.

“She’s a disgrace to the office of First Minister and she should take a leaf out of the books of the Welsh and Northern Ireland leaders.”

Another added: “Since gaining another term as FM [first minister] she has become more nonsensical than before.

“Oh how she hates everything English and British, yet she loves money from Westminster.

It followed Holyrood elections earlier this month which saw the SNP fall one short of a majority.

The SNP are demanding another referendum on taking Scotland out of the UK.

They have a good chance of getting legislation demanding this through the Holyrood parliament with support from the Greens.

However, Boris Johnson is urging Ms Sturgeon to focus on Scotland’s coronavirus recovery.

Scottish Conservative leader Douglas Ross insists the SNP don’t have a mandate for another referendum.

Following the result, he commented: “We have built a brand, a pro-UK movement, that is bigger than any one person.

“The Scottish Conservative and Unionist Party is going from strength to strength.

“We promised that if pro-UK voters united behind us, we would stop an SNP majority. We did it.

“We promised to stop indyref2 – we have.”

In total more Scots voted for pro-UK parties than nationalist ones in the constituency vote.