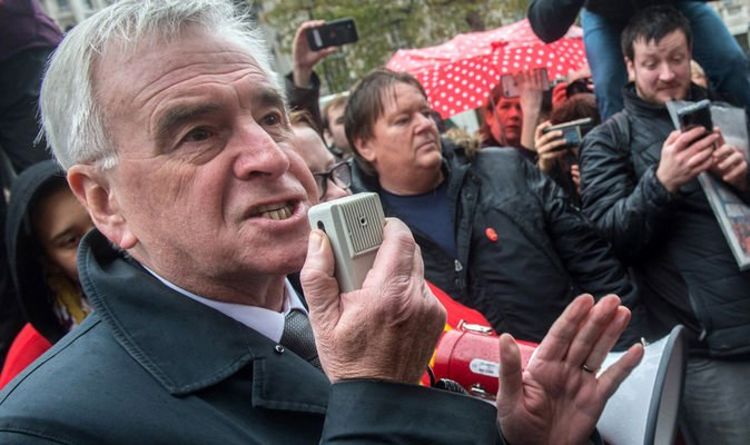 Labour’s former shadow chancellor John McDonnell has urged thousands of pro-Palestinian protesters in London to ignore the Israeli ceasefire in Gaza. Those among the Labour left have continued to stoke Palestinian tensions despite Israel declaring a ceasefire in the conflict on Thursday. Thousands of protesters took to the streets in central London earlier today in solidarity with the people of Palestine in the wake of the conflict.
Mr McDonnell, who is a prominent figure in the radical Labour left, called on activists to continue pushing the boycott, disinvest and sanction (BDS) campaign against Israel.

Speaking on a stage in Hyde Park to thousands of supporters, the Labour MP said: “Yes, a ceasefire has been negotiated and we welcome a ceasefire.

“But let’s be clear, there will be no ceasefire in our campaign to boycott, disinvest and sanction the Israeli apartheid state.

“The message is clear, we will not cease our campaign in solidarity until there is justice.

“So let’s make it clear, no justice, no peace.”

The crowds reacted with delight to the speech, as protesters set off fireworks and coloured smoke in response.

Demonstrators in London could be seen wearing costumes, masks and face paint, while others were draped in the Palestinian flag.

The protest, organised by the Palestine Solidarity Campaign (PSC), saw a large crowd block traffic and shutdowns roads near Victoria Embankment on Saturday afternoon as dozens of police officers watched on.

Protesters called for an “urgent” resolution to the ongoing conflict.

The left-wing Labour grouping, the Socialist Campaign Group Rally, released a statement following the ceasefire demanding the UK Government “imposes sanctions on Israel for its repeated violations of international law, place an embargo on arms sales and end trade with illegal settlements.”

It also called for “full support for the International Criminal Court’s opening of an investigation into alleged war crimes in the Israeli-occupied Palestinian territories.”

At least 230 Palestinians were killed in Israeli airstrikes that raged for 11 days.

It is believed 12 have also been killed in Israel following rocket strikes by the terror group Hamas.

Hours after the ceasefire came into effects, the first convoys of humanitarian aid arrived in Gaza.

Palestinian officials warn that tens of millions of dollars will be needed to rebuild the region already hit hard by COVID-19.