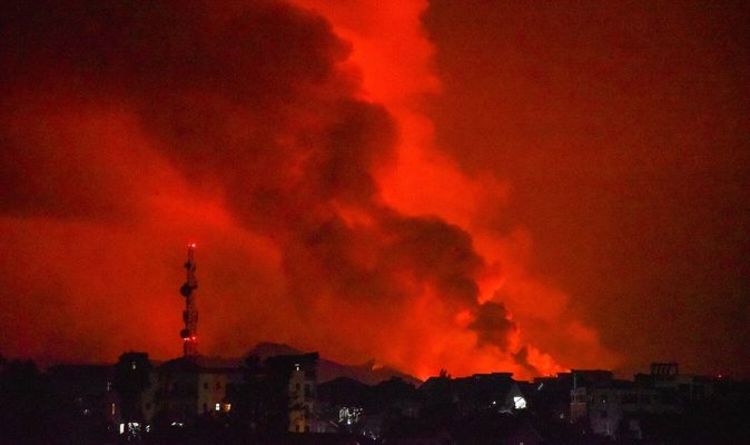 Thousands of people living in the vicinity of Mount Nyiragongo left their homes as the night sky turned an eerie shade of red. Its last eruption, in 2002, resulted in the death of 250 people and left 120,000 homeless.

Nyiragongo is located in Goma, the capital of North Kivu province which has a population of two million people.

It is one of the world’s most active volcanoes and is also considered among the most dangerous.

Resident Zacharie Paluku told the Associated Press: “Everyone is afraid – people are running away. We really don’t know what to do.”

He added: “We’re already in a total psychosis.”

Goma is located several kilometres from Rwanda’s border, which 3,500 Congolese have crossed as part of the evacuation effort.

Rwandan state media said they would be lodged in schools and places of worship.

Dario Tedesco, a volcanologist based in the city, has said lava is flowing south towards Goma.

He told Reuters: “Now Goma is the target.

“It’s similar to 2002. I think that the lava is going towards the city centre.”

Monusco, the UN’s peacekeeping mission in the country, is conducting reconnaissance flights.