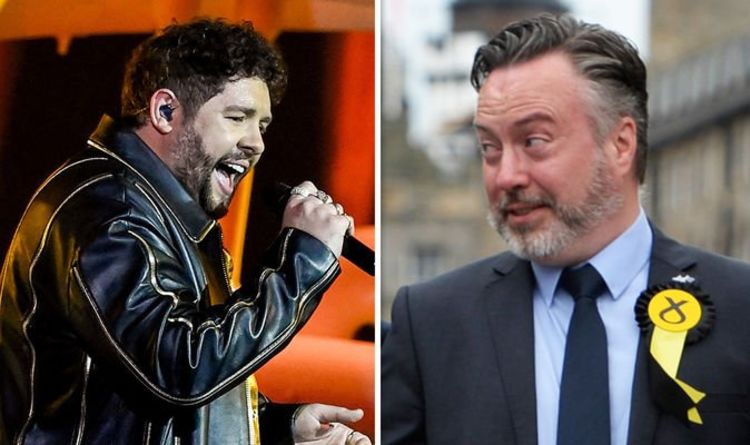 Britain was humiliated this weekend when the UK entry, James Newman, was awarded no points from neither the national juries and the public — meaning he came last in the competition. While this is not the first time the UK has found itself towards the bottom of the Eurovision scoreboard, the show remains immensely popular among British audiences. Statistics revealed 7.4million watched the competition on BBC One, as audiences peaked at 8.4million — and at one point had a 48.5 percent audience share.
SNP MP for Stirling, Alyn Smith, blamed Britain’s lack of success in the talent contest in the way the BBC presents the programme.

Speaking in 2018, when he was an MEP, he told The Sunday Herald: “It’s a little bit snide and grudging the way the BBC does it.”

He may have been referring to the cynical commentary which was first introduced by the late presenter Terry Wogan — he provided the voiceover for the British broadcast, always shared on BBC One, up until 2009.

He was then replaced by fellow presenter Graham Norton, who also injects some humour into his commentary when introducing each country’s act.

However, Mr Smith explained how Eurovision is a missed opportunity.

He continued: “There’s a reticence on behalf of serious artists to say they’d go for Eurovision because of the way it’s done in the UK whereas across the rest of the EU it’s a big gig, a big showcase.”

He also called for a rotation system in the UK, meaning each home nation would have the chance to contribute a contestant for Eurovision every four years.

A similar system is already in place for international sports competitions, when Scotland, England, Northern Ireland and Wales enter separately.

He went on to pitch the plan to the European Broadcasting Union, the producers of Eurovision — of which the BBC is one.

Although the first independence referendum saw a majority of Scots vote to remain in the UK, the EU referendum saw the Scottish public support staying in the bloc as opposed to leaving.

The SNP have since renewed their call for an independent Scotland to be a member of the European Union following Brexit.

Many also pointed the finger of blame at Brexit for the UK’s poor performance in Eurovision this year.

Another member of the SNP then faced backlash after she said Scotland “hates the United Kingdom too” in response to the vote.

The Scottish Tories hit back and claimed it was another example of the party’s “toxic obsession with division”.

Cllr Spear later apologised for the tweet and said in a statement: “I have now deleted this tweet about the UK’s results in the Eurovision Song Contest and apologise for any offence caused.”