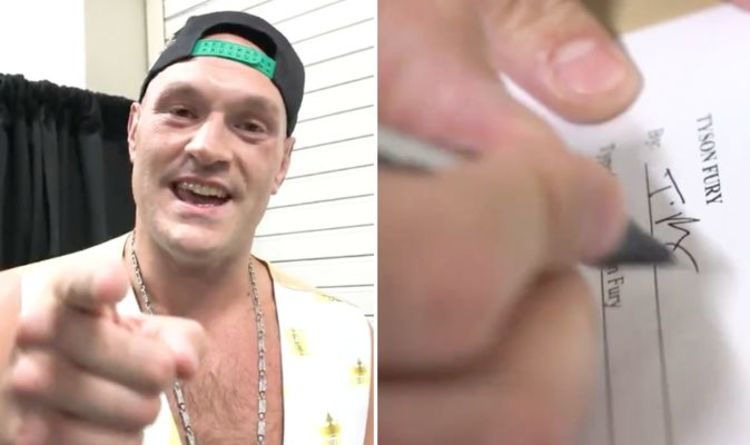 Tyson Fury will now face Deontay Wilder in a WBC heavyweight title trilogy fight after “The Gypsy King” signed a contract to face “The Bronze Bomber” for a third time.

Footage of Fury signing the fight contract was shown live during the ESPN+ broadcast of the Jose Ramirez vs. Josh Taylor title fight in the States, as the WBC champion upheld his side of the agreement after an arbitration court ruled that Wilder was contractually due a trilogy fight following Fury’s seventh-round TKO victory in February 2020.

The pair fought to a controversial split draw when they first met in December 2018, as Fury got up off the canvas late on to take the fight the distance after appearing to outbox knockout artist Wilder for much of the contest.

That fight demanded a rematch, and the pair met for the second time in 2020, where Fury dominated the bout before eventually stopping the American to capture the WBC heavyweight title.

With Fury holding the WBC belt and fellow Brit Anthony Joshua holding the remaining heavyweight titles, the clamour for a unification bout began immediately, with the pair eventually signing a two-fight deal to face each other.

But, hot on the heels of the announcement that Fury and Joshua would meet in a titanic unification bout in Saudi Arabia on August 14, news emerged that an arbitration court had ruled that Wilder’s claim for a trilogy fight should be upheld.

Fury then asked his entourage, “Are you sure now? Or shall we hijack our way out of here and go to Saudi Arabia and fight somebody else?

After putting pen to paper, Fury then turned to the camera and delivered a message direct to Wilder as he vowed to finish him once again.

“You’ll get knocked out! End of! One round! You’re going.

“I’ve got your soul, your mojo, everything. I own you! Super smashed!”