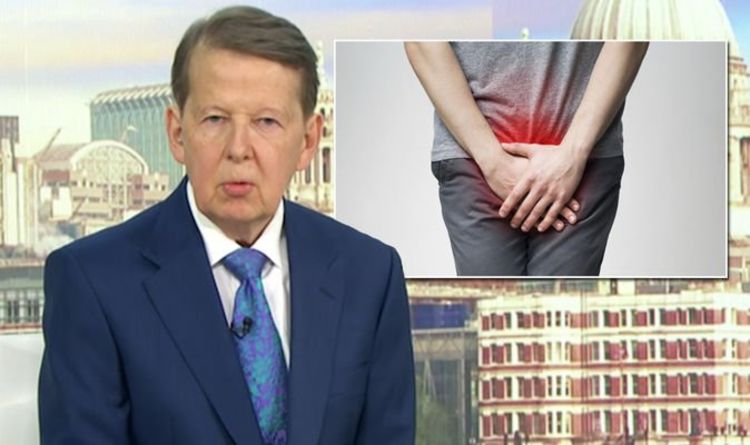 Prostate cancer is a form of cancer that begins in the gland cells of the prostate, found only in men. It usually develops slowly, so there may be no signs for many years. In fact, symptoms of prostate cancer do not usually appear until the prostate is large enough to affect the tube that carries urine from the bladder out of the penis (urethra), according to the NHS. When it comes to testing, men need to be more forthright in getting better screening and diagnosing, said Bill Turnbull.

Bill Turnbull is no stranger when it comes to prostate cancer and better screening.

Bill Turnbull has revealed he ignored symptoms before being diagnosed with terminal prostate cancer.

The broadcaster was told by doctors in 2017 that he had incurable prostate cancer, which had spread to his spine, ribs, pelvis, hips and legs.

Bill discussed the importance of PSA screening tests and how men need to not “take no for an answer” when it comes to testing.

Bill said: “PSA should be four or less and when I was diagnosed it was 583.

“We got it down very quickly, but it goes up and it goes down with the treatment.

“Currently I’m 96 but it was 180 a month earlier so I’m making good progress and after the show I am going off the Royal Marsden Hospital where I get amazing treatment and well get the latest figures then.

“I want to just keep it down and keep it there for as long as I can.”

In terms of testing, Bill added: “The main take away is press your GP and don’t take no for an answer if you have symptoms.”

Symptoms of prostate cancer don’t usually show until the disease has progressed, so you shouldn’t wait, according to Angela Culhane, Chief executive of Prostate Cancer UK.

She added: “PSA test gives a lot of false positives.

“Sometimes the tests can’t differentiate the nasty tumours and the ones that don’t need treatments.”

PSA is a protein produced by both normal and cancerous prostate cells, said Cancer Research UK.

The health site continued: “It’s normal for all men to have some PSA in their blood.

“A high level of PSA can be a sign of cancer. But a high PSA can also be because of other conditions that aren’t cancer, or due to infection.

“A PSA test on its own doesn’t normally diagnose prostate cancer.

“Men over 50 can ask their doctor for a prostate specific antigen (PSA) blood test. The PSA test can be unreliable. Your GP will discuss the risk and benefits with you.”