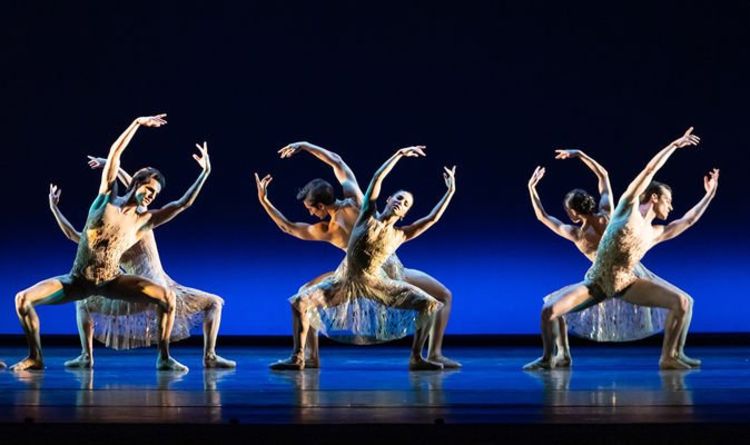 Christopher Wheeldon’s glittering Within The Golden Hour opens a dynamic mixed bill. Flawlessly danced, it pays beautifully intricate homage to the glorious age of classical choreography. The entire piece is a feast for the senses. Against glowing montone backdrops in vibrant orange through to the azurest of blues, the dancers are clad in semi-sheer Jasper Conran costumes strategically scattered with sequins. Wheeldon’s mastery of elegant lines shines as much in the fluid group formations as it does in some of the solo and partner work. Francesca Heywood is a dream, gliding through a pas de deux with Valentino Zucchetti. In a night that is often as much about the silhouettes as the movement, this is the lightest and loveliest work.
The other three pieces are all new to the company, starting with the Kyle Abraham’s newly commissioned Optional Family: A Divertissement. Before the curtain rises, it opens to much mirth around the audience with a painfully amusing recording of a couple confessing everything they hate about each other.

Royal Ballet superstars Marcelino Sambe and Natalia Ospiva combine their larger than life presences with their explosive technique as they come together and whirl apart (Ospiva wilder than ever in dizzying spins).

The piece really comes alive, though, with the entrance of a third dancer. Stanisław Węgrzyn is a revelation, making a spectacular leap from the corps de ballet and more than holding his own as his character tangles with both of them. Suddenly the piece become darkly and slightly menacingly sexy – and all the more interesting for it.

The absolute stand out of the night for me, though, is Crystal Pite’s The Statement. Commissioned in 2016 for Nederlands Dans Theater it is already well-established as a ground-breaking sensation but it is new to The Royal Ballet.

Set to the spoken word soundtrack of a shady corporate power play, every single syllable is embodied on stage in almost cartoon extremes of body-locking and contortions by four dancers gathered around a conference table. Joseph Sissens, Kristen McNally, Calvin Richardson and Ashley Dean are all extraordinarily good, creating almost impossible angles to match the moral contortions in the script.

Believe me, however much the premise really doesn’t sound like a dance lover’s dream, it is breath-taking and thoroughly deserving of the roaring approval from a spellbound audience. Quite simply, it is one of the most marvellous things I have ever seen.

The night wraps up with another Pite classic, Solo Echo. Set to Brahms against a black backdrop with an endlessly gently cascading waterfall of tiny lights, it shows another side of the Canadian choreographer’s flair for exploring shaping.

It is inspired by Mark Strand’s poem, Lines For Winter (check it out, it is chillingly beautiful). The seven dancers mass in an urgent struggle against the dark, bleak depth of winter. They spin apart and then reconfigure in a dizzying array of formations. It is powerfully danced by the company but, at times, I felt the choreography was packed with almost too many striking tableux whirling past a little too quickly to catch.

Overall, this new programme, plus the announcements last week of a raft of promotions for rising stars in the company, is an emphatic statement that The Royal Ballet has its eyes firmly and confidently fixed on the future.

THE ROYAL BALLET: 21ST CENTURY CHOREOGRAPHERS: At The Royal Opera House to May 30, live stream on May 28 and then on demand to June 27