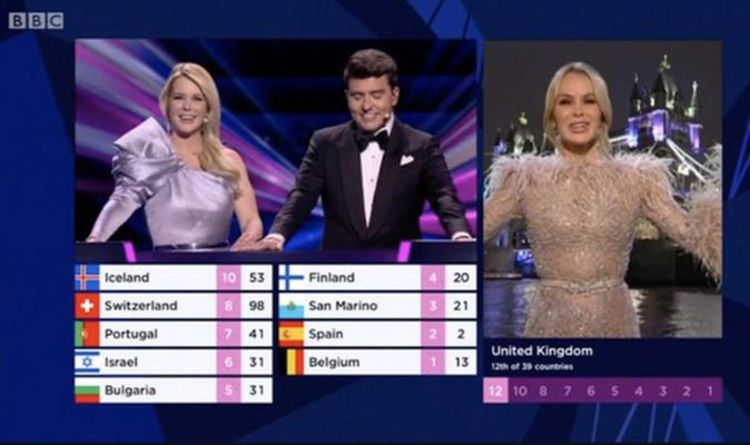 Representing the UK at Saturday’s grand final, the Britain’s Got Talent judge appeared on the show to reveal how the country’s jury had voted. Her brief feature is being widely condemned online by many viewers for being “arrogant” and “ignorant”.
When Amanda was revealed to be the UK jury spokesperson last month, the star said she was honoured to join the likes of Nigella Lawson and Mel Giedroyc who previously took on the role.

Discussing her excitement, Amanda said: “What an honour to announce the UK’s votes this year. I’m utterly thrilled. It’s an ambition ticked after 45 years of watching it! Now, what to wear…”

During this weekend’s grand final, however, not everyone shared Amanda’s happiness over her appearance on behalf of the UK.

When the Rotterdam hosts moved over to Amanda in London during the vote reveal, she said: “Bon Soir. Goedenavond.”

What followed infuriated many viewers, as Amanda added: “That is good evening in French and Dutch, although I’ve got absolutely no idea which is which.”

The remark received instant criticism on social media, with the star being branded as “arrogant”.

One said: “Also how ignorant and damn right arrogant was Amanda Holden – to think her little pretending not to know which languages she was speaking act was cute or funny? It came across incredibly insulting to those countries I think.”

A second added: “On behalf of the whole UK, I apologise to #Eurovision for the embarrassment that is Amanda Holden making it all about her plus her stereotypical ‘I don’t speak foreign’.”