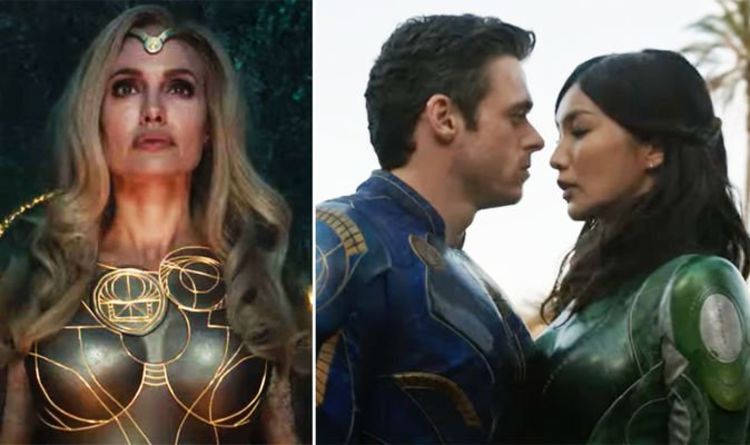 For the first time, this year will see four Marvel Studios movies released in cinemas, beginning with Black Widow and Shang-Chi and the Legend of the Ten Rings. But now the first teaser trailer for the third film Eternals has dropped promising a millennia-spanning epic. The MCU blockbuster follows an immortal alien race created by the Celestials who have secretly lived on Earth for over 7000 years without interfering in events.
However, following a tragedy in the aftermath of Avengers Endgame, the Eternals are reuniting to protect humans from their evil counterparts known as the Deviants.

Angelina Jolie stars as Thena, a fierce warrior who can form weapons out of cosmic energy.

While Richard Madden plays Ikaris, the tactical leader of the superhero team who has incredible strength, is able to fly and can shoot beams from his eyes.

From the trailer, it’s clear he has a special bond with Gemma Chan’s Sersi, who Marvel boss Kevin Feige has described as the film’s lead.

The upcoming movie is heavily rumoured to feature former Sony Peter Parkers Tobey Maguire and Andrew Garfield, plus a whole host of Spider-Man villains from across the multiverse.

It’s not clear yet how the Eternals will crossover with the Avengers, but with alternate realities set to open up no doubt their help will be needed at some point.

Perhaps they’ll next show up in 2022’s Doctor Strange in the Multiverse of Madness or even Thor: Love and Thunder?

Also set for release in 2022 are Black Panther: Wakanda Forever and Captain Marvel sequel The Marvels.

While 2023 will see Ant-Man and the Wasp: Quantumania and Guardians of the Galaxy Vol 3 land in cinemas.

Also in the works are Blade, Fantastic Four, Deadpool 3 and the mysterious Avengers 5.

Eternals is released in cinemas on November 5, 2021.