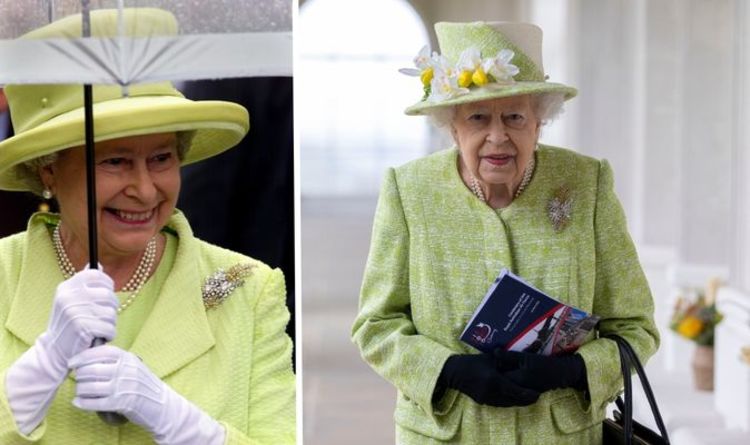 The Queen is rarely seen without a brooch on her lapel, usually worn to complement her strikingly bright outfits. But Her Majesty’s brooches are more than just pieces of beautiful jewellery: they symbolise deeper meanings and reveal significant aspects of the Queen’s life.
“There are several priceless brooches owned by the Queen that are steeped in history and you could say these jewels attest to the sheer wealth and power of the British monarchy.”

Some brooches in the Queen’s collection combine both national symbolism and the natural world, such as the Canadian maple leaf brooch and the New Zealand silver fern brooch.

Both these brooches represent the national plants of Canada and New Zealand, respectfully.

Another brooch to symbolise a plant that is native to one of the Commonwealth countries is the Australian Wattle brooch.

The brooch represents the strong friendship between the UK and Australia as it was given to Her Majesty during her first visit to Australia in 1954.

This was also the first trip to the country by a British reigning monarch.

Robert Menzies, Australia’s prime minister at the time, gave the Queen the brooch on behalf of the Government and People of Australia at a State Banquet in Canberra.

The brooch features three flowers, encrusted in white diamonds, and leaves sprouting out of the flowers, which are made of yellow diamonds.

According to the Royal Collection Trust, the flowers are in fact tea tree blossoms and the brooch is in the shape of a wattle, which is a tree native to southeastern Australia.

The wattle is also the national floral emblem of Australia and features on its Coat of Arms, along with the kangaroo and the emu.

The brooch’s floral design makes it the perfect choice for springtime occasions, according to the Court Jeweller, and the Queen in fact wore the brooch for an engagement this spring.

Queen Elizabeth wore the brooch with a bright lime green coat for her first public engagement of 2021.

Her Majesty had made several virtual appearances throughout the year but, on March 31, she stepped outside Windsor Castel for the first time since December to attend a service at the Commonwealth War Graves Commission Air Forces memorial at Runnymede.

As well as the brooch and her lime green coat, the Queen wore a pale yellow hat with flowers at its front, black loafers with thin gold buckles, and a black handbag for the ceremony.

The Queen has worn the brooch with a yellow outfit before, most notably for the Commonwealth Service at Westminster Abbey in 2017.

On that year’s Commonwealth Day, Her Majesty wore a canary yellow wool coat with silver buttons, and again matched her coat with a yellow hat.

In keeping with the brooch’s floral design, one of the Queen’s first ever appearances wearing the brooch was for the annual Chelsea Flower Show in May 1960.