As seasoned dodgeball professionals over here at Nintendo Life, we’re well aware that the most important aspect in creating a successful video game based on this king of sports is nailing the sound that a ball makes as it smashes powerfully into the face and/or body of your opponent. It really needs to get that springy, rubbery, wince-inducing “thwack!” just right and, we’re happy to report, Knockout City does just that. This is a quick, slick and colourful team-based arcade sports game that gets the basics right, builds on them with some neat tweaks and twists and serves up some excellent and addictive action as a result.

If you’re the type of player who tends to shy away from online competitive action, not one for the constant deaths, steep learning curves, lengthy match times or complex meta of many of the currently popular squad-based offerings, this bright and breezy effort could well be something worth dipping your toes into. Getting started, having a measure of success and, most importantly, enjoying yourself in Knockout City really is as simple as picking up a dodgeball and throwing it. It’s clear that Velan Studios — the developer behind Mario Kart Live: Home Circuit — has thought long and hard about how to make this one accessible on a very basic level and the decisions they’ve made have paid off handsomely here. 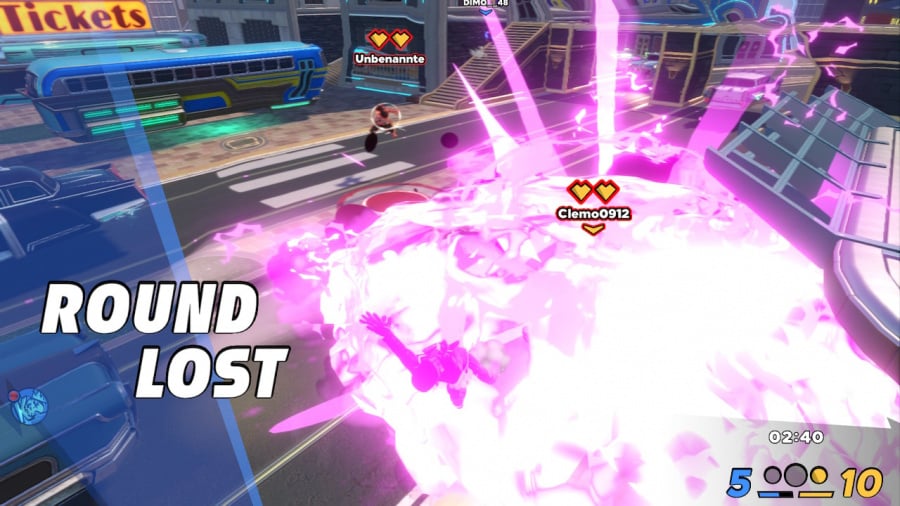 Jumping into Knockout City for the first time you’ll be guided through an easy-to-follow tutorial that walks you through everything you need to know, from how to move around and throw and catch balls to more ‘complex’ stuff like lob shots, curveballs, perfect catches and team passing. Picking up a ball and nailing an opponent or catching an incoming shot really couldn’t be simpler though and that’s all the info you really need to begin having some success. By just walking into a ball here you’ll grab it from its spawn point, holding in ‘ZR’ locks to your nearest enemy and releasing sees an auto-tracked shot make its way to your chosen target — you don’t even need to aim. Catching an enemy’s attempt to nail you in return is as easy as watching out for a red indicator around the edges of your screen that means you’re being targeted and then timing a press of ‘ZL’ to catch the ball as it arrives. That’s really all there is to it, and with that you’re free to blast around the game’s five arenas, chucking balls at skulls and racking up points for the win.

Of course for those who want to excel — to form clans and climb the league leaderboards (once they go online) — there are layers here, with a surprising amount of depth to work with and lots of clever ways to turn the tide in your team’s favour and emerge victorious as the true kings of pinging people right in the face. The five Splatoon-esque levels currently available in Knockout City are all about verticality and environmental hazards, you see, and as such your 1950s greaser-style avatars can jump, spin, dodge, flip, sprint and even glide around arenas, giving you lots in the way of options as you duck and dive out of harm’s way or get up close and personal with your opponents.

Dodging, by holding a direction and pressing ‘Y’, doubles up as a nifty way to deflect an incoming enemy shot and also serves as a means to tackle opponents, knocking them back several feet and opening up the possibility of chucking them down the nearest lift shaft or off a skyscraper for an instant kill and points on the board. Spinning and flipping by pressing ‘A’ or ‘X’ can be combined with ‘ZR’ for lob and curved shots that help your balls around obstacles and clicking in the right stick performs a fake throw, helping you to screw with an opponent’s timings as they attempt to make a catch. 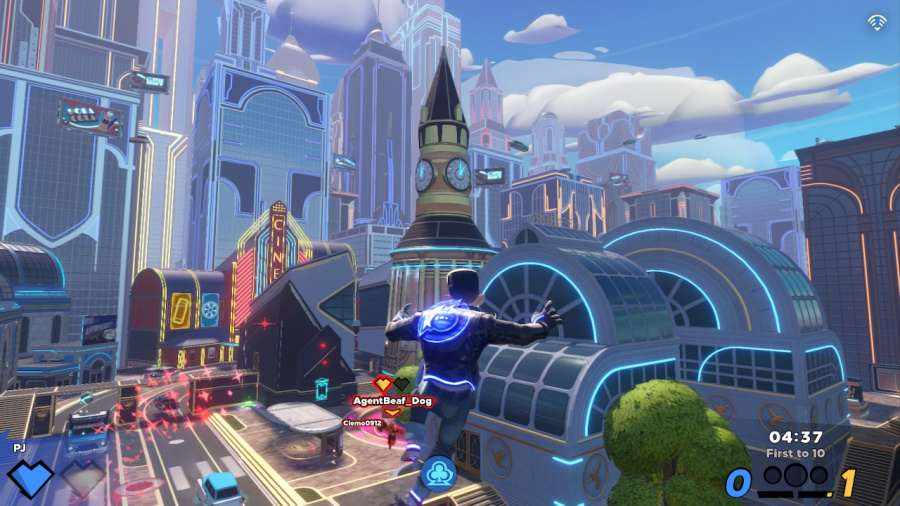 Some of the real fun here though is in rolling yourself up into a ball, or having your teammates do the same, offering yourselves up to one another as projectiles. It’s a hilarious mechanic — a really clever idea — but it also has huge tactical benefits. A normal shot with a regular ball will take two successful hits to KO an opponent, whereas using a teammate grants you an instant kill. It’s a pivotal aspect to the game and one that successful teams will know how to use at the right time to gain the upper hand. You can also hold in the throw button when in possession of a teammate in order to perform an ultimate shot, tossing them high into the air where they take control of their own descent and land back down in an explosion capable of taking out multiple enemies at once.

Further to all of this is passing between your crew, an element of the game that’s being sorely underused at this early stage. For every pass you make to a teammate you automatically gain a level of charge to the ball being passed around, meaning that when you fire it, it travels that little bit faster. Pass it around a few times between your team — up to a maximum of six tiers of charge — and you’ve got yourself a venomous shot that’s all but impossible to successfully catch. Of course catching itself comes into play here, too, and making a perfectly timed catch of an opponent’s shot instantly super-charges the ball, giving you a hot rocket to serve right back into their faces.

Obviously, with the amount of strategy you can build into your game through all these little tricks and mechanics, playing against a good team here (a crew who are properly versed in the dark arts of dodgeball) can see you get absolutely rinsed and this is something that’s happened to us on a few occasions when placed in a team of randoms where people just point-blank refuse to engage with stuff like team throwing and passing. However, get a few friends together and communicate effectively or even just use the basic emotes included in the game to shout for passes and throws when playing with strangers, and a lot of this potential frustration can be quite easily avoided. 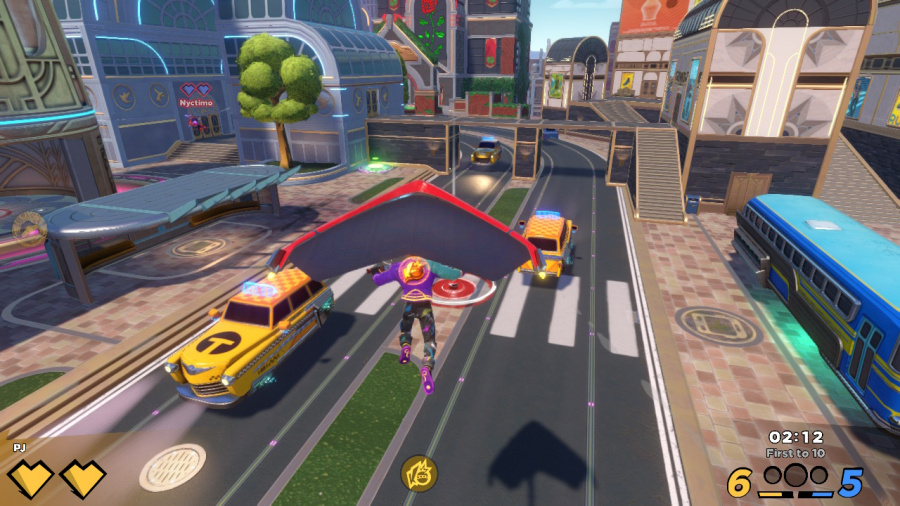 Honestly, if all of this sounds a little complicated, it’s really not. Just getting stuck in with the most rudimentary knowledge here is all you need and these extra mechanics and fancy bits and pieces naturally fall into place as you keep blasting away through rounds that feel perfectly paced; short and exciting little matches that have rarely failed to see us screaming at our screens with joy so far. The five stages on offer at launch are an excellent bunch, too, nice and compact with plenty of verticality and a range of fun environmental bits and bobs, from jump-pads to rotating burger joints, busy freeways where you can hop from car to car, tubes that suck you instantly across arenas and a building site built around a great big neon wrecking ball.

In terms of modes, well, Knockout City does arrive in a pretty barebones fashion in this regard, with the classic 3v3 Team KO easily the star of the show so far. Here you duke it out in a best of three rounds format with ten points winning a round, making for delightfully quick and action-packed matches. At this stage you’ve also got 3v3 Diamond Dash (which requires you to collect a KO’d opponent’s diamond in order to fully secure points), a Party TKO mode (which plays with special balls only – a change that replaces the default game’s smart strategy with all-out madness), and a 1v1 face off mode (for hard-nut loners). Those special balls that feature in Party mode also appear in vanilla Team KO matches and, for us, this is where they work best, with the odd sniper, moon or bomb ball adding a little variety and spice to proceedings when used sparingly, rather than the complete havoc that results from them being the only option, as is the case in Party TKO. 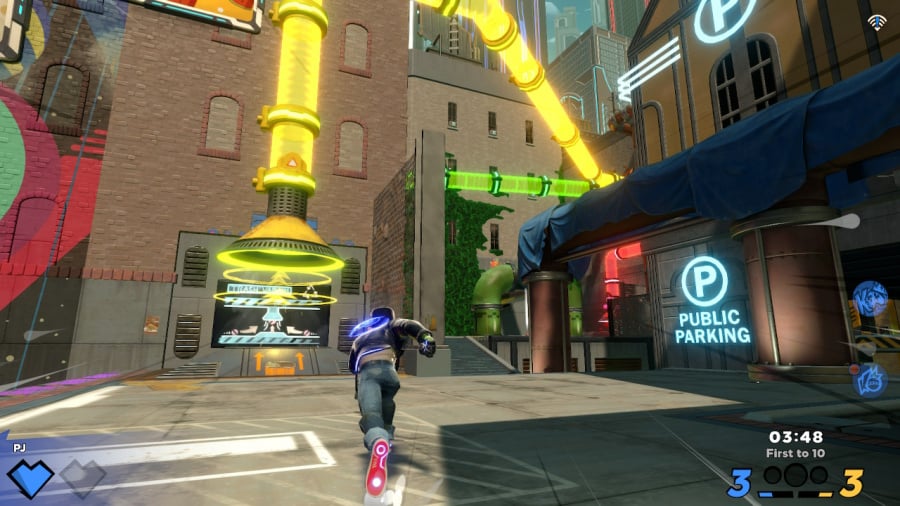 Rising through the ranks as you play matches in any mode sees you gain XP and unlock a steady flow of slick cosmetics — happily there are no unlockables that affect your core abilities or powers — and you’ll even be awarded with the in-game currency, Holobux, (which can also be purchased with real money) to spend in the store on outfits, hairstyles, emotes and all that stuff. There are lots of daily objectives to complete for extra XP, with a Block Party event currently dishing out rewards over the game’s launch period and, overall, Knockout City just feels like it’s really hit the ground running. Sure, there’s not a ton of modes on offer so far but, with more stages and game types incoming, including league play and a 4v4 mode, what’s currently available is certainly more than enough to hook us in for now, and considering there’s a free ten-day trial on all platforms, there’s really no reason not to jump in and see how you like this one for yourself.

With regards to performance on Switch, Velan Studios has also managed to deliver the goods here. The textures may have been reduced down a little from other versions of the game but, flicking between this port and our Xbox version, there really aren’t any stand-out differences or concessions aesthetically, the colourful mash-up of Fortnite and Splatoon’s graphical stylings successfully making the transition to Nintendo’s hybrid console. In fact, we’d go so far as to say being able to play this one in portable makes the Switch version the go-to way to play Knockout City. There’s also an option to switch between quality and performance modes, allowing you to dial back the graphics in order to raise the framerate from a rock solid 30fps to 60fps. We’ve tried both and, although it’s nice to have the option of 60fps, we have to say we prefer the quality/30fps option as visually things get pretty ropey in performance mode. 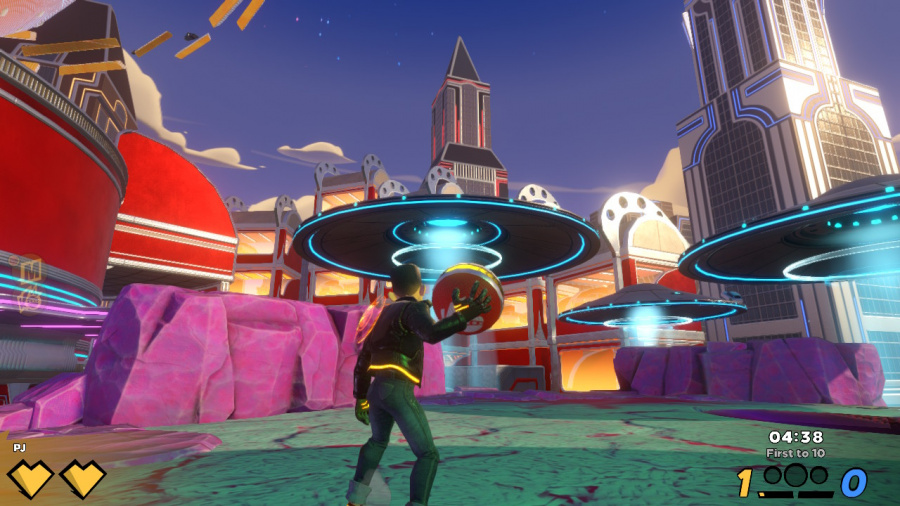 With cross-progression and cross-play across all available systems also included from the get-go, Knockout City really does seem to have positioned itself well for plenty of future success and, even as things stand in terms of a slight lack of modes at this early stage in the game’s life, we can’t help but be hugely impressed thus far. This is one slapstick arcade sports effort that players of every skill level should check out ASAP.

Emma Raducanu says her knee hurts from a nasty injury sustained at the US Open.