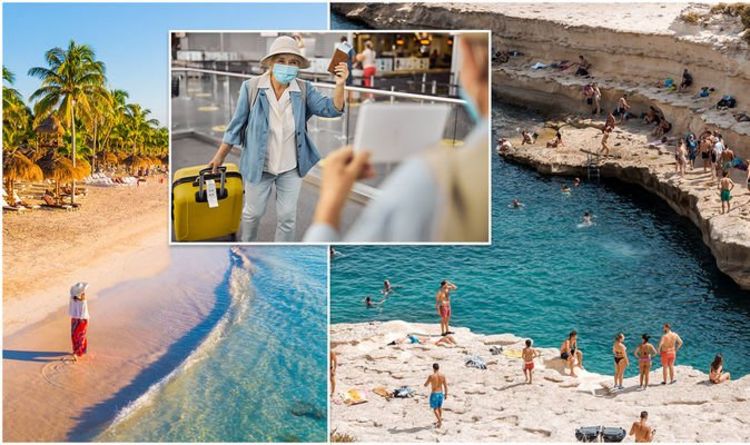 Holidays are back on for countries that have made it onto the Government’s green list for travel. At the moment, however, the choices are very slim with just 12 countries on the list.
What’s more, not all of the green list countries are allowing Britons to visit for leisure purposes just yet.

However, a further review of the list is anticipated to happen “in the first week of June” according to Secretary of State Grant Shapps.

Ahead of this, travel experts Simon Calder and Paul Charles have offered their prediction as to which countries will make the cut on their weekly travel radio show Your Travel Questions Answered on Travel Radio.

Though there has been some speculation Malta will be one of the few nations added to the list, Mr Charles said he believes there will actually be “a handful” of countries that make the cut.

“There was a story saying just Malta will make the green list. I think it will be wider than Malta,” he said.

“I think there will be a handful of countries added to the next green list review in early June and I think you’ll be looking at Malta, some Caribbean islands, Grenada, Antigua, possibly St Lucia I think.

“I do think you will see Barbados, I think you’ll see Bermuda, some of the British Overseas Territories which should have made it last time.

However, Simon Calder says he believes there will be a few more that also make the green list.

“I think we might get some combination of Finland, Romania, Slovakia and Norway put on which between them probably get as many tourists in a year as Majorca gets in a day,” Mr Calder predicted.

He continued: “I’m going to throw in three others. Bhutan, Saudi Arabia and Fiji.”

Both travel insiders pointed out that any changes would be dependent on the Government’s criteria.

This is something which Mr Charles says needs to be made clearer to the public.

“It’s murky and there needs to be more clarity on how the Joint Biosecurity Centre is made up and who is on it, how they make the decisions,” he said.

Speaking on Sky News, Secretary of State for Transport Grant Shapps said he can not yet confirm which nations will be placed on the green list.

“Not to disappoint you but the next review is the first week in June, so not very far away, and I’m afraid we will have to wait until then,” he said.

“Not least because I don’t have that information from the Joint Biosecurity Centre who are still carrying out that work to make sure it is as up-to-date as possible.”