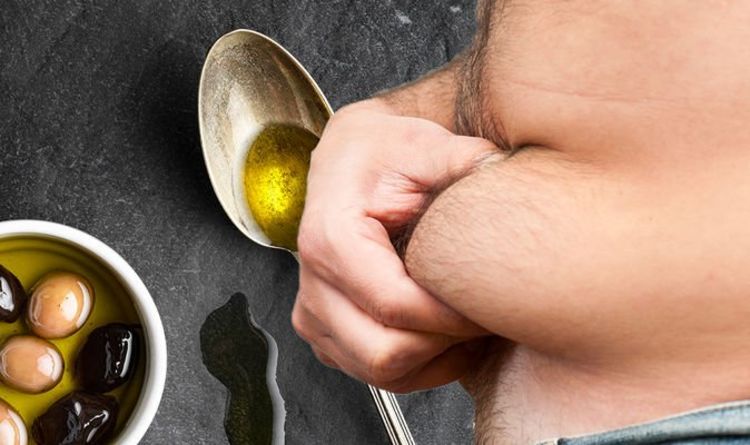 Visceral fat, also known as belly fat, lurks near vital organs in the body, such as the liver and intestines. It has been linked to a range of metabolic disturbances and is a contributing risk factor risk heart disease and type 2 diabetes. Fortunately, you can decrease the amount of visceral fat stored by making healthy dietary tweaks.
Research has alighted upon some surprising dietary solutions.

By the end of the study, results showed that the group that ate the coconut oil had a decrease in abdominal fat, while the soybean oil group actually showed a slight increase in belly fat.

READ MORE: How to get rid of visceral fat: The 80/20 diet is easier to follow – burn belly fat

What are HDL and LDL cholesterol?

Cholesterol – a waxy substance found naturally in the body – comes in two forms: HDL or LDL.

LDL cholesterol is branded the “bad” cholesterol because it collects on the inside of your artery walls, thereby raising your risk of heart disease.

HDL cholesterol, on the other hand, counters this harmful mechanism by picking up LDL cholesterol and transporting it to the liver where it is flushed out.

DON’T MISS
Statins side effects: One symptom you should not ignore [ADVICE]
Vitamin B12 deficiency: Glossitis is a sign [INSIGHT]
High blood pressure: Herb to lower BP [TIPS]

If you want to reduce your belly fat, you’ll need to burn more calories (energy) than you consume, and eat the right kinds of food.

Bupa says the following can help you to achieve this:

The health body also says to cut out sports drinks, sugar sweetened drinks and other foods that have a lot of added sugar in them.

“Be aware that low-fat options might have high amounts of added sugar in them.”

One of the most important food groups to eat is soluble fibre.

“This is because soluble fibre absorbs water and forms a gel that helps slow down food as it passes through your digestive system,” explains Holland and Barrett.

“It helps you feel fuller for longer, so you end up eating less and not snacking excessively.”

In addition to eating well, exercise is integral to visceral fat loss.

Studies have shown that you can help trim visceral fat or prevent its growth with both aerobic activity (such as brisk walking) and strength training (exercising with weights).

According to Harvard Health, spot exercises, such as sit-ups, can tighten abdominal muscles but won’t get at visceral fat.

“Exercise can also help keep fat from coming back,” adds the health body.