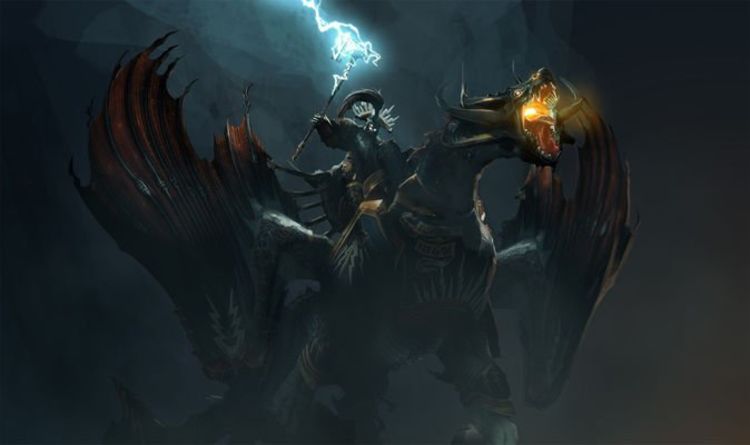 Warhammer fans are getting another new game to play in 2021, and this time it comes from the Age of Sigmar.

Age of Sigmar: Storm Ground has a release date set for Wednesday, May 27, across PS4, PS5, Xbox One, Xbox Series X and Nintendo Switch.

The new Warhammer title will be a turn-based strategy game that boasts three playable factions this month.

This will include the Stormcast Eternals, the ghoulish Nighthaunt and the Maggotkin, with descriptions for each listed below:

“The Eternals, Storm Ground’s sturdiest warriors, are worthy of their name. Banding together in tight formations around their hero allows them to withstand tons of damage and shine in long battles.

“Nighthaunts on the other hand are much more fragile, relying on debuffs to weaken their enemies and on summoning units to overwhelm them.

“Last but not least, the Maggotkin compensate their generally sluggish movement with an unrivalled ability to control the battlefield, turning hex tiles into dangerous hazard zones that inflict debilitating effects on the toughest of enemies with ease.”

Developers Gasket Games has confirmed its full plans for its latest Warhammer game release for 2021.

According to the latest news shared online, Warhammer Age of Sigmar: Storm Ground: release time has been set for midnight BST on PS4 and Switch, and 1am BST on Xbox consoles, on May 27.

A message from Gasket Games explains more, telling fans this week: “Those battles are intense, tactical fights across a wide variety of battlefields in the realms of Life, Death, and Metal.

“Every tile has tactical relevance, from valuable high ground to aethyr pools brimming with energy and ancient chests filled with secrets and rewards. Use the strengths of your army to gain the upper hand and slay the opponent’s hero, or his totem, securing victory.

“Pick one of Storm Ground’s three factions – the stalwart Stormcast Eternals, the ghoulish Nighthaunt and the putrescent Maggotkin – and lead your highly-customisable force in this dynamic turn-based strategy game packed with fast-paced warfare.

“In campaign mode, upgrade your army by collecting new heroes, units, wargear, skills, weapons and more. New units will allow you to build your army your way, choosing who to field with every new battle and customizing every facet of their equipment to match your playstyle.”