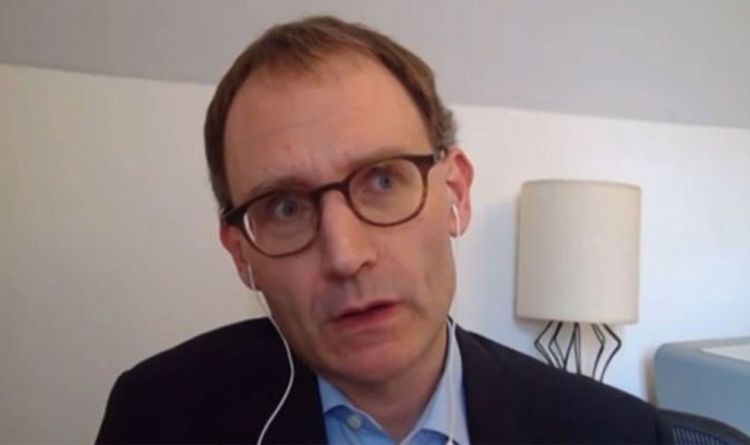 Professor Neil Ferguson, British epidemiologist at Imperial College London and member of the Scientific Advisory Group for Emergencies (SAGE), discussed the threat the Covid mutation poses to the UK’s roadmap out of lockdown.
Telling the reporters it is a “matter of degree” whether the variant derails an end to Covid restrictions, the SAGE member said there is data suggesting it could effect younger people more than previous strains.

He said: “There’s a hint in the data that under-21s are slightly more likely to be infected with this variant compared with other variants in recent weeks in the UK.

“Whether that reflects a change in the biology or reflects what’s called founder effects and the context – the people who came into the country with the virus and then seeding of infection in certain schools and colleges – that’s impossible to resolve at the moment.”

The SAGE member also said “we hope to be in a position to be more definitive about these answers in the next two to three weeks”.

Currently, Covid vaccines are only available to those over 30 years old, which could explain the rise in cases in younger people.

Professor Ravi Gupta, microbiologist at Cambridge University, also told the press conference: “I do think we should take these reports [of it spreading more quickly in the young] seriously because that’s the first sign that you have a problem.

“Often if you wait too long for the right data it’s too late.

“Hopefully the countries where they’re seeing this will be studying it in a kind of rigorous way so that we can get that information.”

Public Health England (PHE) reported yesterday cases of the Indian variant have been found in 151 local authorities as of the week ending May 15.

Latest data from PHE also revealed that 3,424 cases in total had been confirmed in the UK until May 19, with a majority detected only in the week prior.

Chief medical officer Professor Chris Whitty said on May 14 the variant is expected to “overtake and come to dominate in the UK in the way that B.1.1.7 (Kent variant) took over and other variants have taken over prior to that”.

SAGE has estimated the variant is up to 50 percent more transmissible than the Kent variant.

Prime Minister Boris Johnson has said the UK still needed to be “cautious” in unlocking the UK from restrictions, but added he saw nothing in the data that would suggest “deviating” from the plan.

Another 186,147 first doses and 387,987 second doses of Covid vaccine were administered yesterday.

Yesterday also saw another 3,180 cases and nine deaths within 28 days of a positive coronavirus test.