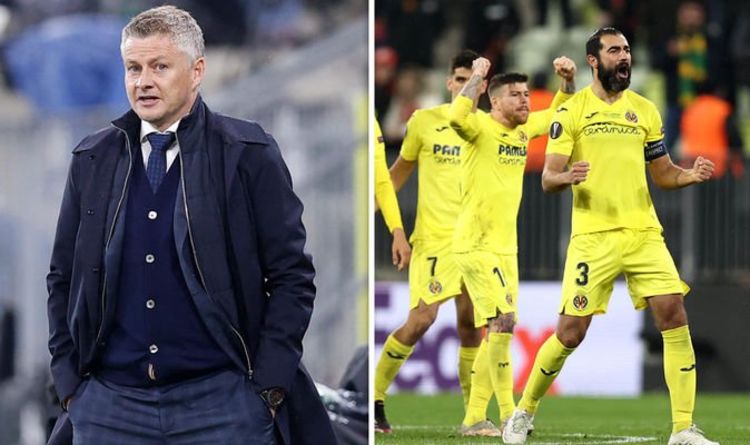 Manchester United saw their hopes of Europa League glory ended by Villarreal in the final on Wednesday night. Gerard Moreno and Edinson Cavani cancelled each other out with goals in either half. But it was the La Liga side who ended up reigning supreme via a dramatic penalty shootout, with David De Gea missing the decisive spot-kick as United lost 11-10.
United went into the match against Villarreal looking to win their first trophy in four years.

But it wasn’t to be, with the La Liga side causing a major upset by beating Ole Gunnar Solskjaer’s side on penalties.

Moreno put the ‘home’ side in front in the 29th minute, outmuscling Victor Lindelof before prodding the ball past David De Gea from close range.

United then levelled through Edinson Cavani, with the Uruguay international scoring his 17th goal of the season.

But Villarreal ended up winning via a penalty shootout, sending the yellow-wearing fans inside the stadium in Gdansk into ecstasy in the process.

Express Sport will now take a look at the four players who let Solskjaer down on the night.

Before the game, Marcus Rashford admitted to playing with pain throughout the majority of the campaign.

And it was clear from this showing that the England international wasn’t 100 per cent at the races.

Deployed on his favoured position on the left wing, Solskjaer gave Rashford the best possible chance to take the game by the scruff of the neck.

But the 23-year-old didn’t take it, enduring a chastening night throughout.

Rashford must do better on the biggest stages if he’s to ever live up to comparisons with Paris Saint-Germain star Kylian Mbappe.

The best players deliver when the pressure is on.

And while Bruno Fernandes has enjoyed a fantastic individual campaign, the Portugal international went missing on the night.

Fernandes was thwarted at every avenue, with Villarreal’s game plan to stop him paying off emphatically.

Without the 26-year-old on the ball, United simply aren’t the same.

And he’ll now have to brush himself down and go again, with the Red Devils hopeful he can lead them to the Premier League title next year.

This was a huge night for Victor Lindelof, especially with Harry Maguire sidelined.

And the Sweden international failed to sparkle on the night, enduring a rough evening as Villarreal rang rings around him.

He looked nervy when the pressure was on in extra time.

And, even before that, he failed to do enough to stop Moreno from putting the La Liga side in front.

It’s no wonder United are eyeing Raphael Varane behind the scenes, with the France international poised to leave Real Madrid this summer.

The France international said before the game that he remembered dancing jubilantly in the aftermath of their 2-0 victory over Ajax four years ago.

But there was to be no dancing from Pogba tonight.

This was a flat display from the 28-year-old, who was substituted with mere minutes left on the clock.

And he’ll have to do better if he’s to ever live up to his £89million price tag.