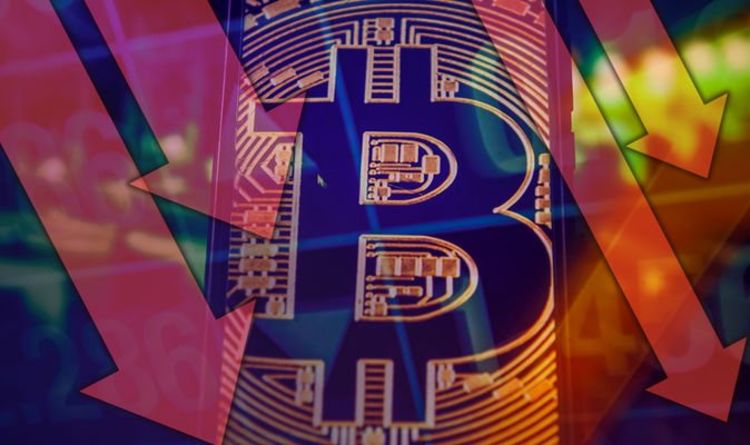 He said: “In the crypto currency space, the crypto king isn’t showing much strength as well and it is very much clear that we are likely to see more downward moves for the Bitcoin today.

“The primary reason for this is that the price has rejected the 200-day SMA on the daily frame, and it has failed to stay above the 40K price level.”

Litecoin – billed as a lighter and faster version of Bitcoin – dipped three percent to $ 183 and is nine percent its value from a week ago.

Enjin Coin (ENJ) has seen the biggest fall over the last 24 houtrs, plunging 16 percent after surging 44 percent to $ 1.93 in the previous 24-hour period.

The cryptocurrency market has crashed over recent days, fuelled by the Chinese Government’s ban on using the digital payment method.

Tweets from Tesla founder Elon Musk have lashing out at Bitcoin’s energy consumption have also acted as a driver for even more downfall.

This sparked market panic, with the views of Mr Musk leaving investors perplexed and leading to further fears about the legitimacy of using cryptocurrencies.

In February, the Tesla boss said $ 1.5 billion of the firm’s corporate budget will be used to buy Bitcoins and it would also accept the cryptocurrency as a form of payment.

But earlier this month, Bitcoin’s price plummeted to its lowest since February after Mr Musk hinted Tesla may sell its cryptocurrency holdings.

Bitcoin’s price plunged by almost 10 percent to below $ 45,000 for the first time in nearly three months before edging upwards to just under $ 46,000.

Just days earlier, Mr Musk had suggested the electric car maker was thinking of selling or may have already sold some of its holdings in the cryptocurrency.

A tweet sent to him said: “Bitcoiners are going to slap themselves next quarter when they find out Tesla dumped the rest of their Bitcoin holdings.

“With the amount of hate [Elon Musk] is getting, I wouldn’t blame him.”

He later followed up that Tweet following the panic he had caused, and frankly wrote: “To clarify speculation, Tesla has not sold any Bitcoin.”

Bitcoin’s value has been sliced in half since its record high of $ 65,000 just a few weeks ago in mid-April.

Despite this, the world’s most popular cryptocurrency is still up a massive 358 percent since the past year, while Ether has surged by 1,300 percent and Dogecoin has skyrocketed by 14,000 percent.